Over the years the sound coders have found ways to capture the analoge and tube-like sweetness in software. Old equipment requires a lot of maintenance, power and is not always 100% reliable. In software we can save settings and when we load them the next day everything will sound exactly the same.

One of the coolest companies doing analog and tube simulation coding in all sorts of plugin formats is Softube. Like Propellerhead they are a Swedish company. They made the great Softube Amp Rack Extension which is included with Reason 8.

Getting that VOX sound

There’s an interesting discussion going on here on my blog between me and a user called Ian on finding that classic VOX sound. He is looking for the specific sound of a Vox AC30 amp with Alnico Blue speakers (like the old Alnico Silver Bell type). I own a VOX AC15 with one Alnico Blue speaker which has a blown tube at the moment. I love the Vox sound. It works nicely on Strats, even when you turn the amp up real loud, which gives it a deep sound. But also when using it with humbucker guitars it won’t make the neck pickup sound muddy.

Here’s a picture of my lovely AC15: 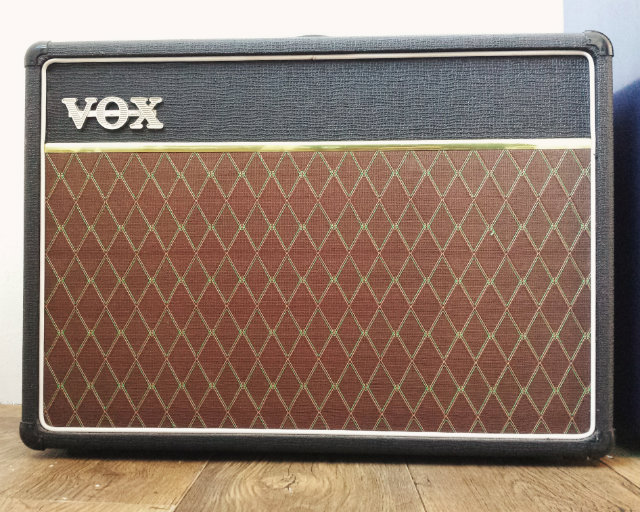 A VOX AC30 was emulated for Softube Amp, although they are not 100% clear about it (tricky ’cause of patents?):

Crunch: British 60’s classic that keeps its chiming, present character whether you play it clean or drive it so hard it’s on the verge of breaking down.

British indeed! Although VOX is now owned by the Japanese electronics firm Korg. The Shadows, The Beatles, The Rolling Stones, The Kinks, the Yardbird, they all used/use VOX. Brian May of Queen is also a well known heavy user. And so is The Edge of U2 who got famous for using his Korg SDD-3000 delay in combination with VOX AC30 amps for getting that wide and spacious sound.

According to Softube it’s the Crunch Cab we should use for that AC30 sound:

Crunch: A more midrange present 2×12, with the small diaphragm dynamic mic placed off axis and a wide stereo room added.

Anybody using Softube Amp in Reason will know there ain’t no Crunch Cab setting! During beta testing Amp I noticed that this got changed to make the difference between Amp and Cab types more clear. So it’s Crunch as Amp type and Room as Cab type we should choose for getting that AC30 sound (Room = AC30 speaker cabinet). A sound that is less direct than the other Cab types because it contains much of the room ambience. I must say it is a great sound though. And the Fat cabinet also works very well with the Crunch Amp type, which results in an in-your-face thick sound but with the complex mids of the Crunch/AC30 amp model. A kinda VOX-stack hybrid.

The “the small diaphragm dynamic mic placed off axis” mentioned by Softube must be the classic Shure SM57, I believe.

My custom build Boutique Amp ReFill includes many of these Crunchy AC30 type of sounds. Because I love the complex mids a VOX amp delivers.

2 Responses to Getting that VOX sound with Softube Amp