As you probably already know this week Propellerhead Software has released Reason 9. It includes some very useful new tools and some of the older stuff that every Reason should have (and thanks to this update now has!).

Let me tell you I am not a big fan of the Autotune. Sure, there are many creative examples, but in general I dislike the soulless (read: no vibrato!) robotic tone which is often chosen as an effect. There are examples where it fits the song nicely, for example on this one: Happy by Pharell Williams.

But Pitch Edit is a different ballgame! It sounds killer. Mind blowing! During beta testing (I was not allowed to talk about this for months because of the NDA) many super users opted that this is possibly the best sounding pitch edit ever done in software. You can do some serious re-pitching, including transposing and shortening of frases and changing the vibrato without getting it to sound robotic unless that’s your goal. Yes, it can do robotic voices as well: simply auto correct everything and remove the vibrato on all notes.

Here’s the real deal, my advice: you don’t have to pitch edit the whole track, but you can use it to correct only a few issues. In my opinion this is a musical way to use it. Just listen to how it sounds and decide the amount of drift and humanness you want. It doesn’t have to be perfect. Gotta love the time in which we’re living’ right? These creative tools will change the music, how it’s being made and how it sounds.

Pitch Edit is obviously also a great tool which can help you learn how to sing better. This tool will show you exactly what is going on. You will see the pitch drifting, you will see the vibrato, the timing. What You See Is What You Get.

You can bounce your vocal tracks via the Bounce Audio Clips to MIDI method. This will create a MIDI track with a Subtractor. This makes it easy to create melodies using your own voice. Very cool! 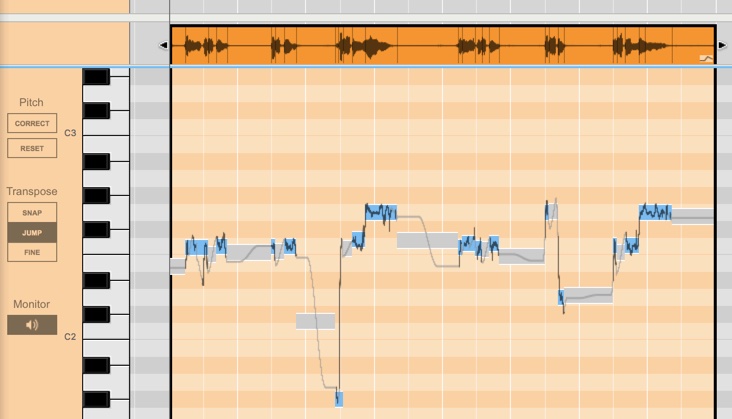 For example Scales & Chords will help a lot of people finding chords. And it will help you to stay in the right key because non-scale notes will be skipped when selecting a key and mode, except when in chromatic mode of course.

I am schooled as a jazz guitar player so my knowledge of harmony is very much okidoki but that doesn’t mean I don’t appreciate a tool which makes it easier to stay-in-key or to generate one-finger chords. I am not a great keyboard player, so yeah, I LOVE one-finger chords (check for example that old patch of mine called One Finger Herbie, which is now included in the Factory Sounds ReFill that comes with R9). And it is also super NICE to be able to change the key and mode you’re in, great for experimentation. Play some complex chords real fast, like a melody? A “real” player would never do that, but with modern software… why not?

Note Echo is also great. My favourite feature is to make it generate a chord based on single notes as input. This way it’s super easy to generate parallel chords. Which I love. And if I want to make them modal, stay in key, I only need to add Scales & Chords Player and select the right key. Just like that, simple as pie! In the same way you can use a Dual Arpeggio with a Scales & Chords Player so everything stays in key. Love that.

For a sound designer/soundware/sound person like me it’s great to know that now every R9 user also has the Softube Amp & Bass Amp, Audiomatic and Pulser Rack Extensions on their system so I/we can design better, interesting and more complex sounds.

I like the Softube Amp & Bass Amp Rack Extension and I have been involved in beta testing these devices. And I remember it getting better with every beta version. One thing I didn’t understand though: the presets that come with the RE are, sorry to say, but rather shitty! And because of this, out of pure frustration I started programming my own patches which I turned into a custom Boutique Amp ReFill. Because guitar players like myself deserve a better sound!

The old Line 6 amp and bass amp simulator devices in Reason are no longer available in Reason 9. It leaves me wonder why. Wasn’t much of a fan of these devices but this feels like a business conflict to me. Strange!

I have blogged about the lovely Audiomatic a few times. Its presets are in fact Combinator presets which were converted in a Rack Extension. It shows the power of the native Reason devices (read: superb sound and totally modular design)!

Many sound designers like myself are adding a Substractor or Malstrom device to a Combinator often only for its LFO. In R9 this is no longer needed because the Props have added Pulsar, the supa dupa LFO unit as default device to Reason. Fantastic!

The ReFill Reason 9 Sounds ReFill that comes with Reason is a cool one. And a weird one. Weird since the name suggests that it contains new sounds for Reason 9. Which it does but it also contains sounds which are like 13 years old! Huh? Yes! Nothing wrong with them because they still kiss #ss but just plain weird to call these Reason 9 Sounds in my opinion.

And what is also cool is that the promo video the Props have put on the Reason page starts with this video:

You see this guy dragging a shaker-loop to the timeline. That’s Shaker_08_120-MF.rx2 and it’s the one of the shakers I created for Reason many years ago. MF = Melodiefabriek. #proud

How to stack Combinators in Reason 8, or 9
the MOD: guitar modulation in Reason