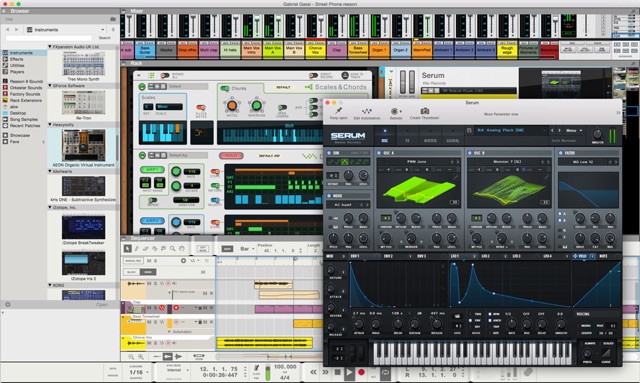 It’s funny how many times Propellerhead has said “we will never do that”. It takes them a bit of time, often a couple of years but eventually they will add it to Reason. Simply because the users can’t be ignored, they want these features, they NEED them! MIDI out, audio recording and VST support, anyone could easily predict that one day the Props would add these features to Reason. It was just a matter of time.

And that time is now: today the Props announced that version 9.5 of Reason will support VST plugins. Including latency compensation for using effects in parallel (on parallel channels) without phasing issues for example.

The VSTs will live in a new Plugin Rack Device that sits in the Reason rack, which seems like a super tight integration. It allows you to route audio any way you want and even has 8 assignable CV controls! So any VST device will have more audio routing possibilities and CV options than many of the native Reason devices and REs, including the Combinator which only has 2 audio ins/outs and 4 CVs!

In my opinion the Combinator needs a MKII version as soon as possible with additional audio routings, more CV ins/outs, a metering system on the front panel showing peak and RMS levels and a way to lock the device (so the device can’t be opened) for developers who want to make money creating boutique Combinator patches.

The RE format is often causing CPU issues, using too much power compared to their VST counterparts. In general Reason uses more CPU power than the DAW systems of the competition. Will version 9.5 fix this? And how will the VST versions compare to their RE counterparts? Something to find out about soon…

This is really good news for all Reason users. But bad news for RE developers and for the Props in general because I am sure many people will prefer the VST versions over the RE versions. So if this means the Props will sell a lot less REs why did they add this to Reason? Because if not users would start using another DAW someday soon I believe. The SDK for VST is simply a lot more advanced than the RE version. Native Instruments Kontakt is the killer format for disk streaming sample libraries. So anyone doing film scoring will use a different DAW than Reason for that. But thanks to VST in Reason 9.5 people will be able to use these libraries in Reason now for the first time. Propellerhead simple HAD to do that or else loose a lot of users which would end up buying a more advanced DAW.

And let’s face it: many more musicians will be seriously interested in buying Reason since it now supports the plugin standard everyone is using.

I have had many discussions about the RE format with many expert users. Its tight integration in Reason is really nice but I feel it wasn’t a wise decision that the Props developed their own plugin format. The RE SDK is still rather limited. And the amount of plugins in RE format is tiny and often not as cheap as its VST counterparts. But most importantly: why do the Props put so much of their precious time into developing something that is already working perfectly fine for so many users? The VST format has been the golden standard for years. THE industry standard. Wake up Sweden! Well they did now.

The VST support in Reason includes multi-channels and CV. The SDK for an IDT RE only offers stereo audio in/out and a single CV in and out.

Propellerhead has lacked a strategic vision for many years. Anyone with brains can predict their future innovations because it is so super obvious. What’s next? Video support in Reason? Without a single doubt, of course!

There’s a huge business challenge the Props have to tackle. They have to find new ways for patch designers and developers to make money because the Propellerhead Shop needs to be filled with great stuff Reason users want to buy. A locked Combinator MKII device is in my opinion the killer idea I am having for so many years. It would allow many patch designers like myself to create super devices and patches for Reason. It should use a little scripting language using XML for choosing controls and switches.

To sum it all up, I hope the Props will focus on this for Reason 10:

20 Responses to Now that Reason 9.5 gets VST support, time for an analysis!