by Marco Raaphorst on September 7, 2016 in blog 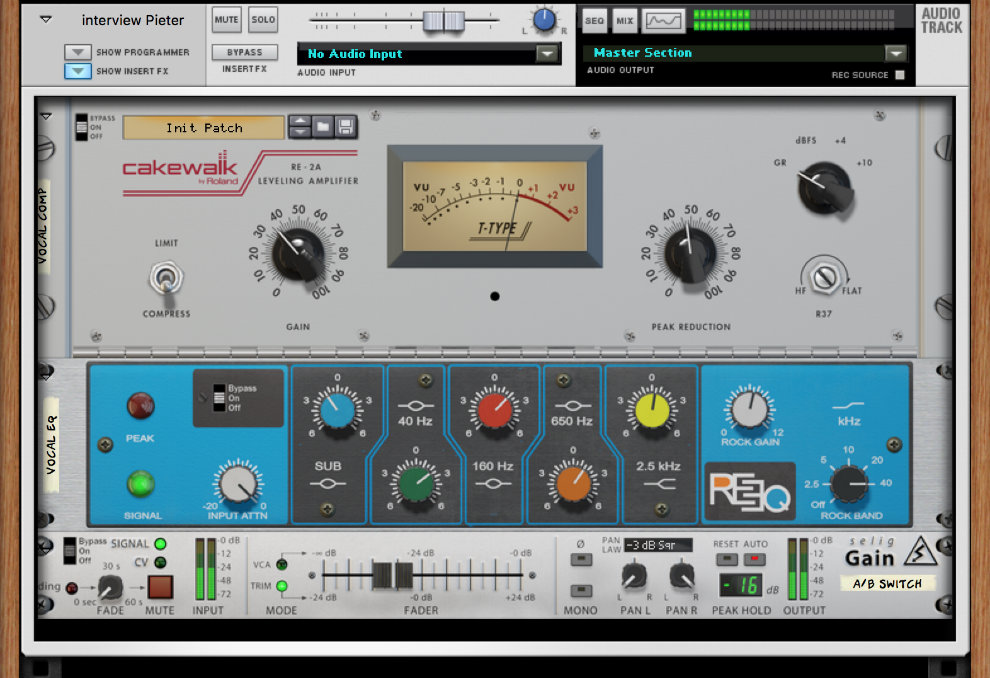 EQ is a godsend. It can save your music, it can save your sound. Recordings that sound terrible can be fixed with EQ. Remove higher mids and turn a shrill sounding guitar in a nice sounding one, suppress the lows or make them sound fatter, anyway: you can fix that sound with EQ.

And let’s not forget the people with a hearing aid. It is the EQ fix that gives them back their (often only partially) hearing.

For years there has been much debate among sound boys and girls about what the best EQ is. The Pultec (expensive) is often cited. And there’s discussion on linear phase versus minimum phase. And what about the statement ‘All Digital Parametric EQs are the same’ (see ericbeam.com/?p=361)?

Recently I came across a modeled version of the Mäag EQ. I was not familiair with the concept and decided to try out the RE3Q Six-band equalizer for Reason. It is a software-based version developed by the Russian company Red Rock Sound.

My mouth fell open. What I heard was the most natural sounding EQ ever! What a godsend! This is joy! The problems most EQ’s have, the phasing trouble for example, seems to be none existent in this unit. How can this be!?!?!

One of the problems with EQ is phasing. A parametric EQ generates a negative/positive phase which is the opposite to the frequency range which is boosted or cut. This is called minmal phase.

The answer to this is the lineair phase EQ, which does not generate the phase issues. But lineair phase EQ is not perfect either, it has its own disadvantages. In the video below the difference between the two immaculate are explained perfectly.

The video above furthermore reaffirms also that an EQ which uses the most CPU power may not be the best sounding one. Many people make the mistake in thinking that ‘a higher number means better sound’. You see it in sample rate and bit rate discussions as well. Most people do not listen with their ears but with their eyes and brains, I would say 🙂

Mäag has invented a whole new concept. A concept that, although I cannot completely understand it (the concept is too new for me), is based on a number of carefully chosen bandpass filters with frequency bands which are overlapping. The result is amazing: almost no phase problems are generated!

It works wonderful on voices. Bad EQ on a voice can be recognised quickly. I hear it constantly. And yes, I have made these mistakes myself as well over the years. You first need to make mistakes before you can learn anything. And you need to make these mistakes yourself, this is the best training. It’s all a matter of using the wrong microphones positioned incorrectly and using the wrong EQ settings. What you then get to hear is a voice that phases like crazy. Often even including peak resonances at certain irritating frequencies.

Sometimes I hear it in a sigh of a voice: weird phasing. Breathing that sounds like someone takes a deep breath using a tube. And often I hear voices that boost the nasal sound instead of suppressing nasality. Comb filtering and that kind of annoying sound. In short: voices that sound unnatural, not ‘open’.

With trained ears, especially on acoustic instruments, you can easily detect something that doesn’t sound natural.

Learning how to use EQ has taken me many years. And I am still learning new things almost everyday. The goal, especially for speech and singing, is to make it sound as natural as possible. If done right, the clarity has increased. Optimising the voice with a microphone, changing the characteristics through the use of EQ and applying compression, it is a true art form.

I hope that manufacturers of hearing aids will consider these new techniques as well. Many hearing-impaired now have devices with poor sounding EQs. Including phasing issues and resonance peaks. What would happen if we add a Mäag EQ to a hearing aid? Worth the try for sure!!!

The tools we can use these days are so wonderful. Software is a true blessing for perfecting sound forever!

UPDATE 1: somehow the terms lineair phase and minimal phase got swapped around in the text. No fixed 🙂

UPDATE 2: Reason expert user Giles Reaves send me a long detailed email which I will copy and paste partially here:

The Maag uses phase just like every other EQ. The difference? This is the same “secret”, though not intentional on Maag’s part, that stereo salesmen have used forever to make you like a certain model over another: “Louder IS better”. This has always been true, always will be true. Take two mixes into someone and ask which they prefer, but make sure the only difference is that one mix is 1 dB louder or the other 1 dB softer. Even a seasoned engineer can’t always pass this test and proclaim only a level difference, which is all that SHOULD be heard. Most however will describe how the louder mix sounds, well, “better”. Period. I’ve done this test to other unsuspecting engineers and it never fails…louder ALWAYS sounds BETTER.

So how does the Maag SOUND like there’s less phase shift going on? Because there is less EQ going on, but it’s LOUDER. Or to put it another way, when you raise the level of a band you ALSO raise the entire audio signal. Boost at one frequency and you boost at all. How does it add up? Here are examples – BTW Marco, you REALLY need to get FuzzMeasure so you can be seeing these phase/frequency relationships in more detail. It will possibly blow your mind though, so be careful… 😉

Here’s what it looks like if you set the 650 Hz control to ± “5”, showing a DOUBLING (6 dB) of overall audio level with this much boost at a SINGLE frequency.

So how does this compare to any other EQ? Here’s the comparison to the GQ7, which can’t boost more than 15 dB so it won’t line up exactly.

Here is the same Maag boost at 650 Hz compared to a max GQ7 boost (matching the Q):

The main thing to notice is the GQ7 (in Blue) doesn’t have enough boost to make it – but that’s not the point. The “point” is that it’s a different EQ curve even if the peaks DID match, and as such will require more phase shift than the Maag curve. Here’s the phase shift comparison of the same graph above – as you can see the GQ7 curve uses more phase shift to get the job done, but that’s because it’s actually doing MORE:

But what it we MATCHED the curve, what happens to the phase response then? Well, if everything I’ve been saying is true, they TOO should match, of course! And they do.
Here’s the result of lowering the GQ7 to a boost of only 10.6 dB, then simply adding 6 dB gain to the overall signal. The frequency curves now match (as close as I could get in less than 1 minute), and of course so does the phase response (see second image below):

(end of copy and paste from Giles’ email)

Here’s my response:
“I only have MClass and the SSL available. I compared both using an A/B switch and couldn’t get them to sound like the Mäag EQ. There was no volume difference between the channels because I compensated for this using the A/B method. But maybe the curves of MClass and SSL simply don’t match with the ones in GQ7 and Mäag.”

Interesting… will be continued for sure! Mäag sounds great but as Giles explains it is just a matter of matching the curves. Mäag as most other EQs is using minimum phase EQ with some very nice sounding curves. Matching them with other EQs might be a lot of works but it probably can be done. The above graphs prooves that you can match the 650 Hz curve of Mäag with the GQ7 Rack Extension. I guess the other curves of Mäag can be matched as well. So in theory you could create a Combinator which matches the Mäag curves (the Combi only has 4 rotary controls which is a real limitation).

Saturation in the RE-2A (and DC-offset issues in Reason)
How to generate odd and even harmonics in Reason?

8 Responses to The Mäag EQ: a natural sounding EQ