Dubstep music is related to dub music. And Dub music grew out of reggae music. Like they say, art always builds on the past, which is true.

Those rhythmic repetitions in dub and reggae music are created by using a delay. In Dubstep this role is taken over by the bass itself. This music has a strong drum and bass relationship, while dub and reggae music is more melodic and uses typical skank rhythm guitars (playing on 2 and 4).

So in Dubstep the bass has kind off taken over the role of the delay. We call this effect the Wobble Bass. And the Pulveriser is perfect for creating some serious Wobble Bass. Let’s explore by creating a patch! Do this:

It would be more useful if we could control the Rate of the Tremor by the modulation wheel or some other control parameter. No problem, first combine these 2 devices into a Combinator and then set up the Modulation Routing so we can dynamically control the Tremor. This is how it should look like: 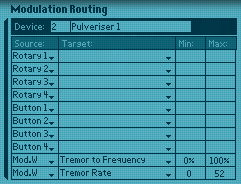 I’m using the modulation wheel for my custom Combinator patch but you might as well assign one of the Rotary controls to it.

As you can see I’m controlling both the Tremor to Frequency as well as the Tremor Rate so I can change the amount of the effect and the rhythmic pattern of the Filter Frequency sweep both at the same time with just one control.

Here’s my demo song using the above method:

I’m sending the Reason song file and the Combinator patch in the Newsletter coming weekend.