by Marco Raaphorst on November 23, 2015 in blog, interviews 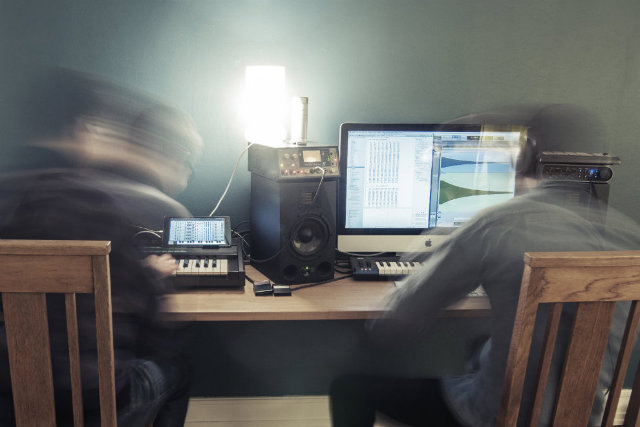 Primal Audio got my attention when they announced on Facebook that they were working on a Rack Extension (for Propellerhead Reason users) version of their popular iPad app: FM4. After that they came out with the PMS-20, a Korg-35 filters simulation, analogue style using dual high-pass/low-pass. And then a couple of weeks ago they gave us, Reason users, the brilliant Ladder Multimode Filter which is based on the characteristic ladder filter design used in the iconic Minimoog synthesizer. A rack device that sounds utterly fantastic and very analogue!

I was curious how Primal Audio approaches Rack Extension design for Reason, so I emailed them a couple of questions. Thankfully Andreas and Nis of Primal Audio were happy to answer them and let me share them on my blog.

What’s your role in Primal Audio?

Andreas: I do the graphics for both products and everything web related.

Nis: I do all the programming and DSP.

We both come up with product concepts and features.

Andreas: We are located right in the center of Copenhagen, Denmark.

1) You seem to focus on developing Rack Extensions for Reason instead of other plugins formats, why is that?

Andreas: There are some benefits developing Rack Extensions. It’s easy to test rack extensions when there is only one host, and there is already a working online store, so selling your products is very easy. Making plugins in other formats requires a bit more testing and you need to, not only build a webshop, but you also need to make the customers visit it.

2) For Ladder, your brand new RE, you’re using industrial circuit simulators. Can you explain what it is and how that works?

Nis: We are not using any industrial circuit simulators directly in our code. Instead the techniques we use are inspired by their approach. Circuit simulators, e.g., SPICE, works by translating circuit elements and their connections into nonlinear differential algebraic equations which are solved using iterative numerical methods such as Newton’s method. Doing so is computationally very intensive and unless you heavily optimize the numeric solver for the specific circuit it cannot be done in real­time. On the other hand the level of authenticity sound­wise, especially when the filter is overdriven, is much higher than with other approaches.

3) Ladder also has a saturation unit, what kind of modelling did you use for it?

Nis: We actually don’t have a separate saturation unit. The saturation arises inside the filter when the circuit elements (transistors, resistors, capacitors, etc.) are overdriven.

4) The sound of Ladder is very analogue, fat and warm sounding, even in the top high­end, what’s the secret?

Nis: All digital realizations of analogue equipment are approximations. The secret is simply to use a better (more accurate) model and solve it better (more accurately). Also we rely a lot on our ears, especially in corner­cases where we are not 100% sure what we are doing.

5) In designing a Rack Extension like this one (Ladder), what is the hardest part?

Andreas: I think concept wise it is hard to differentiate your product from the others. There is so much stuff out there already, and it seems that everything has been done many times before. On a more technical level, modelling the knobs was pretty hard. I’m not a 3d modelling guru­wizard­god­master­person­man (yet) and I wanted to make the knobs properly so that they also looked good from all angles and on bigger 3D renderings, so I had to learn some new modelling techniques.
Nis: The hardest part was to understand the math and get it right and also to optimize the numeric solver so that it can run in real­time.

6) Is some kind of randomness a part of getting a more analogue sound?

Nis: The randomness/chaos that is difficult to model is that which arises in analogue gear because of feedback loops in the circuits. Take the moog ladder filter for instance; it consists of four 1­pole low­pass filters in sequence wrapped in a feedback­loop (the amount of feedback is controlled by the resonance). If the circuits didn’t contain any feedback the derived differential equations would be straightforward to solve. Many digital implementations of analogue filters resolves feedback by delaying it with one sample. Other implementations solves the equations analytically but then disregards the nonlinearities in the circuits (otherwise the equations cannot be solved analytically). As I talked about earlier we solve the equations exactly by using numeric methods which is why our filter sounds more realistic (but also why it uses a lot more CPU).

7) What can we expect from Primal Audio in the near future?

Andreas: We are working on another filter for Reason. If we look a bit further into the future: Audio Units. We really want to broaden our portfolio and since we are working on macs, a natural place to start is with Audio Units. But hopefully we will one day be able to produce plugins for all platforms.

The magic of melodic harmonies
Mixing the master