A lot of people are nostalgic about the past. Retro is popular and that feels kinda strange to me. I remember the past as not being so pretty and thinking all the time about what technology could offer in the future. Because the equipment I was using in the late 80’s and early 90’s wasn’t all that great.

The Tascam Porta 05 4-track cassette recorder I used at home sounded LOFI. Noise was an issue even with DBX noise control. And the high-frequency loss was serious. Drumcomputers at the time sounded crappy. But also in professional studios we had the same sort of issues. Tape was noisy. And when we were working on a mix we had to write all the levels down on the mixing board with a pencil. There was no way to store a mix. Doing a mix using an analog mixer is standing with 2 or 3 guys touching the faders and pots in real time. Mixing was a matter of live performance.

Once in a while, sometimes daily, the tape ran out of sync with the Atari 1040st computer caused by a dropout on the tape. When that happened the engineer needed to record a new SMPTE track for the whole tape in real time.

The old hardware always reacted a bit unexpectedly and random. But it also lacked sound quality. Never ever did we get a 100% true playback when we recorded something onto tape. There was always that hiss and high-end loss. Even the samplers at the time sounded not too perfect using 12-bit techniques.

I remember thinking “what if one day…”. Well that day came in the last decade. Thanks to computer power and smart software I can now do all the studio work in a rather small homestudio and it sounds better than ever before. And it doesn’t cost you an arm and a leg. I never used a Fairlight. With a price-tag of $50.000,- that thing was a little over budget. Me and my friend, the engineer, were dreaming about these kind of devices. What if we would ever be able to purchase such a device? Well now we can.

Analog can sound great. Imperfect equipment in general can sound great. Including 12-bit samples. I love the way it can color the sound. So yes I am very glad being able to choose those effects using software. Just don’t call me nostalgic.

(two photos of the past are included with this post / early 90’s, me working at Studio BMG, Voorburg, The Netherlands) 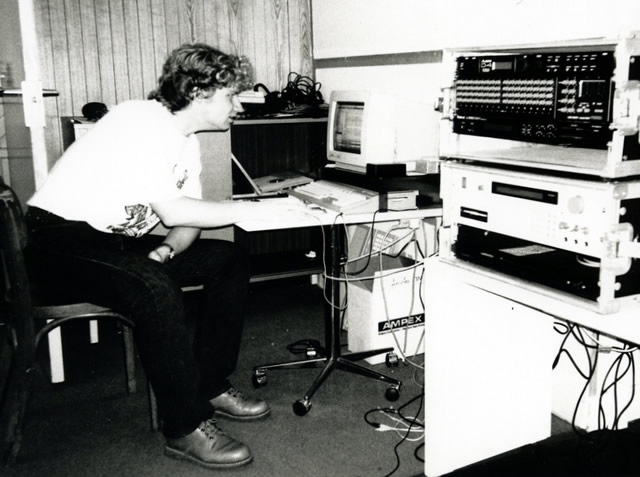 New track: Remaining (and how I did it)
My sounds for Propellerhead Thor synth on iPad