by Marco Raaphorst on September 26, 2016 in blog
The Legend has been updated. It seems I have falsely accused Propellerhead while Synapse were to blame. They needed to fix their code. Which they did. So make sure you read UPDATE 3 at the bottom of this post! 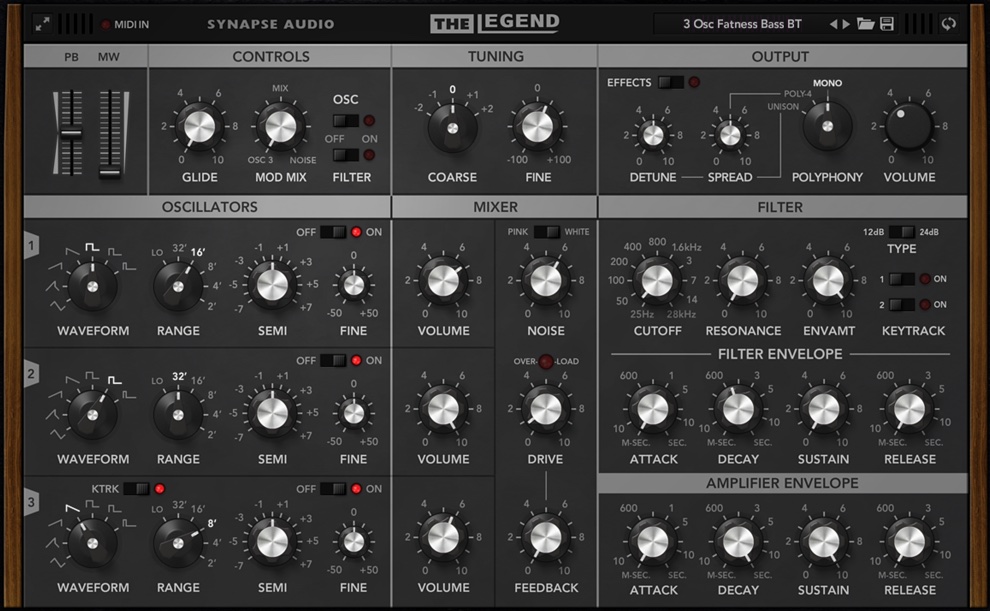 The brand new Synapse The Legend is a great sounding Minimoog Model D emulation. But the lovely sound comes with a price: CPU load is high. The Legend is available in both Reason RE format as well as VST and AU formats, so I decided to compare them. To be precise: RE versus AU. Using Live 9.6.2 and Reason 9.1.

The default patches for the AU and RE versions are different so I needed to do a little programming to make them sound the same. What I found out is that there’s a huge difference in CPU usage. Reason uses way more CPU cycles than Live when running The Legend. Something I was expecting because Reason has gotten a lot less efficient than Live. It used to be the other way around years ago, but the last couple of years I found out that Live runs much more efficiently than Reason on my MacBook Pro (Retina, 15-inch, Late 2013 – 2,3 GHz Intel Core i7 / 16 GB 1600 MHz DDR3 / Intel Iris Pro 1536 MB).

Here’s what I found when running one instance of The Legend using the same patch and the same MIDI clip:

And when running 2 instances of The Legend:

The AU version of the GUI of The Legend looks a bit sharper and realistic in Live than in Reason because Reason doesn’t support high resolution screens like retina (not so nice Propellerhead!).

For my next test I tried to find out how many instances of The Legend I am able to run in Live and Reason. Using 128 samples of latency at 10 devices/tracks with The Legend Reason started stuttering and glitching like crazy. And at 16 instances I got the “computer too slow” warning (using 95% CPU limit in preferences). I then put the latency to 4.096 samples but the audio kept on glitching and with 19 copies/tracks I got the “computer too slow” warning again.

Conclusion: Sweden we have a problem…

It is a huge bummer that Reason is performing so badly compared to live when using this plugin/RE. Something I also notice when I am recording guitar. In Reason I often need a higher latency setting than when using Live. Live is running more efficient than Reason it seems, at least on my MacBook Pro.

I was expecting the First one to be the Moog and the second one The Legend but it is the other way around. Conclusion? The Legend has a much more lively tone than the Sub 37 in my opinion. It has a more interesting sounding enveloppe with more tiny modulations and randomness in sound than the Sub 37.

UPDATE 2: The Props have contacted me and are investigating these issues. Some Windows users have done the above performance test and they also see a huge difference between DAW systems like Studio One for example compared to Reason. 17 instances of The Legend in Reason and 71 instances (!) in Studio One on a very average PC ( old Intel i7-2600 clocked at a stock 3.4 Ghz, with 8 GB of RAM)!

UPDATE 3: Synapse has updated the plugin since. The Props have helped them with it. I regret blaming the Props for these issues because they were not the ones to blame. Unfortunately I am not able to test the effect of this update because my trail period is over.

And btw, I notice worse performance under Live 9.7 now. When I wrote the above blogpost I was using Live 9.6 but in the meantime Live got another update which seems to be performing worse than its previous version, at least for this plugin. An update can break of fix your workflow. I guess any DAW will never be perfect. It is software, so it’s relative. Don’t worry about it too much because there are probably more important things to worry about 😀

8 Responses to Synapse The Legend quick performance test: RE versus AU