Early on I became obsessed by the sound of saturation. That lovely tone Beatle recordings have: the guitars, the squashed tea-towel-drum-sound of Ringo. I discovered Hendrix, Steely Dan (open HIFI sound with warm saturated guitar solos), Todd Rundgren and many more. As a guitar player myself since the age of 12 I got obsessed in finding great sounds using overdrive.

The magic of overtones 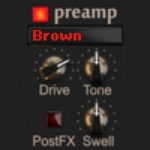 Saturation adds overtones, harmonics to a sound. Using a true sine wave signal you can find out which overtones are created by the saturation device. Often these harmonics have their own enveloppe. Often the harmonics have a faster decay than the original sound when using mild saturation. This is the sound I love the most. These kind of harmonics are creating a more interesting and complex sound but won’t sound overly distorted..

When you really push an overdrive into the extremes you will notice that complex chords will start to sound bad because of the many overtones which are added to the chord sound. The sound simply because overly complicated. But power chords (often used in rock and metal) containing nothing but the root note and the fifth, with or without the octave, sounds extremely powerful through an overdrive. The overdrive makes the chord more complex sounding than it actually is, thanks to the harmonics, the overtones.

What I describe as a great and warm sounding overdrive device is related to the musical sounding overtones it adds to a signal:

The tools I’ve used for my test

Propellerhead Reason is a great tool for experimenting with saturation because Reason includes many devices which can overdrive a signal. For today’s experiment I am comparing two of my favourite devices: the Pulveriser and the Revival Rack Extension. Revival is a tonewheel synth with a superb FX section containing a Preamp section with several modeled amplifier types, each with a unique character and analog-distortion quality.

Using a true sine wave (no overtones) you can exactly find out which overtones are created by the saturation effect. So this is how I did my own tests, using the true sine wave of the Thor Wavetable Osc (A3 sine tone) and send it through either the Pulveriser and Revival. I used the superb Spectrum Display of Ableton Live for analysing.

Thor into the Revival RE with the Brown Preamp at 50%

Thor into the Revival RE with the Brown Preamp at 75%

Thor into the Pulveriser with Drive at 50%

Thor into the Pulveriser with Drive at 75%

The Pulveriser creates higher overtones while the Brown preamp shows a warmer high-end rolloff.  You can use the Filter and Tone control of the Pulveriser to kill these high frequencies too (experiment with using the filter before or after saturation!).

The decay of the overtones is different too. The Pulveriser has a more static decay while the Brown preamp has a nicer decay on these harmonics/overtones. By the way The Echo has a nice saturation algorithm with a fast decay which is really nice too. Of all the standard devices The Echo, creates the warmest saturation in Reason imo. The Pulveriser as a unit is capable of more diverse sounds, including warm sounding overdriven tones if you know what you’re doing (read: using the filter section in combination with the dirt section).

But lets face it: the Brown preamp of Revival is the real hero here. It can overdrive signals which will stay in that lovely musical zone. The preamp of Revival has many more saturation presets which also sound totally analog to me. And in combination with Softube Amp, Kuassa Creme or Vermillion you can achieve some of the best guitar tones ever.

UPDATE: some changes were made because of the additional information and comments I received from Giles Reaves (see comment section below).

What do you hear when you look?
A Portrait [disquiet0177-netlabel-portrait]

11 Responses to Warm saturation in Reason: Pulveriser versus Revival