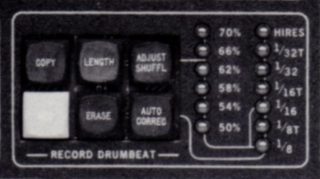 A year ago I made the documentary Oostende Healing about Marvin Gaye’s Midnight Love album which he recorded in Belgium (close to where I live, the Netherlands). What makes the album so special is that he used a Roland TR-808 throughout the whole album for the first time. The Roland TR-808 is now considered a classic but at the time Roland promoted it as a cool device for making demos.

One of the things the TR-808 didn’t have: shuffle mode. Roger Linn invented this Groove Parameter For Drummachines and added it to his first legendary sample based invention: the Linn LM-1 Drum Computer.  The same shuffle modes can be found on the Akai MPC samplers (which were also designed by Roger Linn).

My implementation of swing has always been very simple: I merely delay the second 16th note within each 8th note. In other words, I delay all the even-numbered 16th notes within the beat (2, 4, 6, 8, etc.) In my products I describe the swing amount in terms of the ratio of time duration between the first and second 16th notes within each 8th note. For example, 50% is no swing, meaning that both 16th notes within each 8th note are given equal timing. And 66% means perfect triplet swing, meaning that the first 16th note of each pair gets 2/3 of the time, and the second 16th note gets 1/3, so the second 16th note falls on a perfect 8th note triplet. The fun comes in the in-between settings. For example, a 90 BPM swing groove will feel looser at 62% than at a perfect swing setting of 66%. And for straight 16th-note beats (no swing), a swing setting of 54% will loosen up the feel without it sounding like swing. Between 50% and around 70% are lots of wonderful little settings that, for a particular beat and tempo, can change a rigid beat into something that makes people move.

Both Propellerhead Reason and Ableton Live include a groove module with a bunch of shuffle presets which were taken from the famous LM-1/MPC series. In Live you can apply groove to any clip that is warped/time-streched (even when using the Complex Pro mode). In Reason this is limited to only instrument-clips/tracks. You can not apply groove to audio tracks. You can add a groove to a DrOctoRex device but that takes a lot of steps compared to Live.

One Response to Roger Linn’s Shuffle