I love USB. The Line6 Guitarport for example gives me joy: I simply connect it to my laptop, plug a guitar in and I can start playing and recording.

Lately also some microphones are using USB interfaces which is extremely cool: no need to use a mixer, a compressor and phantom-power. The Røde Podcaster mic (silly name!), although dynamic (condensor works better for vocals, percussion and accoustic guitars – the stuff I am doing most) mics are not my first choice, this mic might be just what I need.

I am planning to record some music in a mobile way: I will visit some musicians and record at their studios/houses. So all I need is a laptop and a mic. This mic maybe 🙂

But there are other options as well… 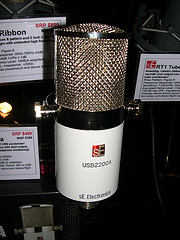 The SE Electronics USB2200a mic for example is a condensor mic using nothing but one USB interface. It even includes phantom-power!

Condenser mics are less easy to handle though, because they are prone to dying young when you’re trowing water, dust or sand on them. A little less road-proof for my mobile trips maybe.

Although USB is a great and easy interface there are a couple serious concerns. The first one: latency. USB uses more latency than PCI and PCMCIA devices. Normally this is not a serious issue and even Guitarport (which is using like 6 ms minimum latency on guitars) works great. But things change when using vocals. With vocals you really need extremely short latency values, 2 ms at max! and even then it’s not perfect! So how are these mics compensating for this? Probably by using direct-monitoring. Both mics are using a headphone output on the mic which probably mixes the audio signals from your computer with the sound coming from the mic. I am very much interested if this work correctly. If so, I probably want both mics 🙂 I then can swap between them, plug them in when I want to, just like I would do when using a mixer – plug and play. That would really be something!

Creative Commons Netherlands release their first CD+DVD
My Dutch blog is nominated for the top10!