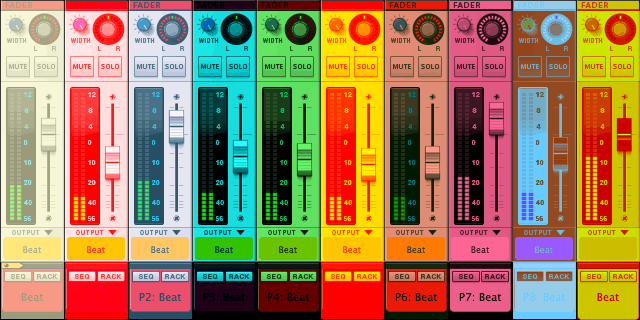 Bob Katz coined the term “parallel compression” and has described it as an implementation of “upward compression”, the increase in audibility of softer passages. Studio engineers in New York City became known for reliance on the technique, and it picked up the name “New York compression”.

This technique is simple to use but very effective for fixing and changing sound in general. You can also use it for EQ’s, reverbs, delays, overdrive, anything really. Create a parallel channel for a drumbeat which sounds a bit thin, add more lowend to it by using a lowpass filter using the standard mixer’s EQ, compress it, maybe even gate it to make it a little more punchy sounding, and listen to how it adds more lowend to the original sound when you blend both channels.

Those familiar with Photoshop know that by using layers you can make very precise color and image corrections. Using the original image together with a bunch of layers can totally change that image. Parallel channels works in the same way. Using this technique you will be able to add subtle EQ changes which are not possible when you would apply them onto the original channel. The magic trick is caused by that blend with the original channel, running channels in parallel.

Think of all the possibilities! Maybe your microphone lacks a tiny bit of that high end sizzle. Maybe your kick needs a bit of oomph. Maybe your vocals need a more sweetened and compressed midrange. The “we’ll fix that in the mix” answer was never a popular one but nowadays we can fix things in the mix. Things you thought your mics were not capable of. And yeah, it feels like photoshopping. But better. Because we are working with sound.

Don’t forget to check out the great introduction video on using parallel channels in Reason by James Wiltshire. It might change your approach for mixing.

My old DX100 comes back to life
New track: Remaining (and how I did it)