The Tremor section in Pulveriser is an LFO which can modulate the Filter Frequency parameter and/or the main output Volume parameter. You can set the Rate to a specific value and the modulation will occur in that tempo. What I will show you in today’s example is how you can change that tempo, that Rate value, by making it to speed up or to slow down.

The Pulveriser has a Follower section which can modulate the speed of the Tremor by use the Follower to Rate parameter. This works like an enveloppe follower (*duh* that’s why they called it the Follower): when the gate is opened it will make the speed go up or down a bit for the time the gate is opened. The envelope follows the curve of the signal , following it’s attack and decay. Using a positive Follower to Rate value will add more speed to the Rate of the Tremor. Using a negative Follower to Rate value will slow it down. This way the Tremor will become a kind of Leslie device when controlling the output Volume parameter because its speed will slow down or go up when the enveloppe of the Follower is opened. This is a very interesting effect which can be used to make synths sound less static. But it’s also a great device for creating those Dubstep bass lines using a slow LFO which is being speed up controlling the Filter Frequency of a synth.

To get you into the groove, let’s try something fairly simple. We only need a Subtractor and a Pulveriser for this little experiment. 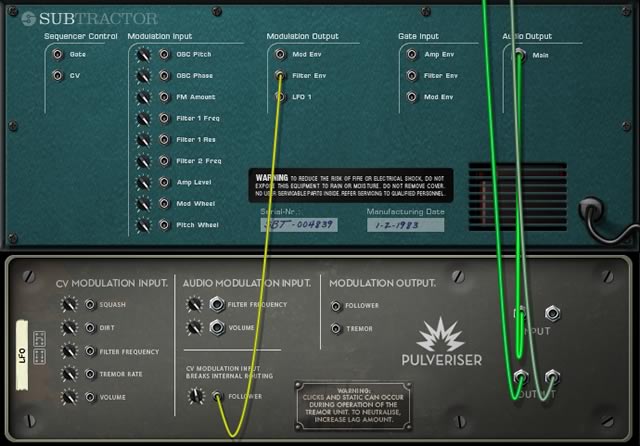 When we now play the Subtractor, depending on how we’ve set it’s Filter Envelope that enveloppe will open the gate of the Follower which will control the Rate of the Tremor. If we set the attack of the Filter Envelope high that means that the Tremor’s Rate will be unaffected till the Follower kicks in (you’ll see its red light flas when it kicks in). And depending on the value of Follower to Rate (+ or -) the Rate will go up in speed or down is speed which also follows the decay of the Filter Envelope (the time the speeding up or slowing down will occur).

With this little setup you can control the Leslie effect by using the Filter Envelope of a synth like the Subtractor or any other synth or sampler in Reason.

Be aware of note release as trigger for Filter Envelope

The Filter Envelope modulation CV output doesn’t send polyphonic signals. This makes perfect sense because CV is a monophonic signal. So therefore to trigger the Leslie to go up or down in speed you need to release the notes on your keyboards for every note or chord you want that effect to set in. Which is also kinda cool because when you start playing legato the effect will not set in. So you can really play this effect in a musical way.

Check out my song (notice how some chords will let the Leslie effect set in while others played legato will not trigger the effect):

As always: Lag is your friend

Use the Lag parameter in Tremor to make the transients of the LFO smoother. When the Rate is speeding up or down these transients can become sharper than you would like. By adding more Lag it will soften these edges/transients.