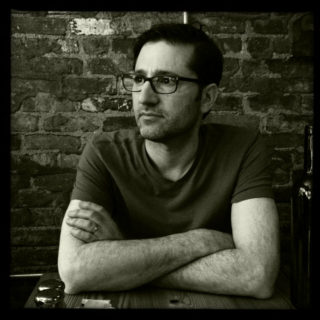 I was thrilled when I read that Marc Weidenbaum was writing a book on the album ‘Selected Ambient Works Volume II’ of Aphex Twin. I was even more thrilled when I received the book and started reading it. Although my foundation of music is based around melodies, harmonies and rhythms – as a guitar player I love playing of chord charts, Real Book stuff and old Motown tracks – I’m also very much interested in sound and spoken word.

Maybe these latter things had never really gotten into my system had I not found out about em411.com, an electronic forum for musicians who didn’t mind breaking the rules. My conservative world full of melodies, harmonies and rhythms was yearning for some new twists so I became very active on that some 11 years ago. Then one day the name Aphex Twin came up. Until then I hadn’t heard any of his music. I had made a track called Baby and some people heard a connection with Aphex Twin in it. Although I still don’t hear that connection myself, that’s how I got into his music.

The cool thing about Aphex Twin or Richard D. James, his real name, is that he has a knack for creating fantastic melodies, harmonies and rhythms. But he bends these musical elements into new sounds. He likes to experiment and seems to finish his ideas in a quick way. He ones told that when he gets bored editing a track he considers it done.

His album ‘Selected Ambient Works Volume II’ contains elements of generative music. All tracks fall into the ambient category but Richard isn’t copying any of the ambient pioneers here, like Steve Reich, Philip Glass and Brian Eno. The whole feel of ‘Selected Ambient Works Volume II’ is both modern and both ancient. It’s both chill and claustrophobic. And it’s hard to pinpoint the time in which it was created, 1994.

Marc Weidenbaum, who writes a lot on the subject of ambient sound and experimental music at Disquiet.com has written a fantastic book on that album. I was happy that he wanted to be interviewed by me about it. Further on I will refer to the album shortened as SAW2. The book is part of the 33 1/3 series published by Bloomsbury.

Richard D. James likes to keep a lot of things secret so details about his equipment and his workflow he treads very much as hidden data. I tried to contact Ernst Nathorst-Böös of Propellerhead software, because I had heard that Ernst has shown an alpha or beta version of Reason software to Richard. Ernst unfortunately didn’t respond to my request via DM by Facebook. Fredrik Hägglund (graphical designer of many of the early Reason devices, interviewer and writer of Reason manuals and tutorials) did respond and told me he’d remembered a couple of things:

I wasn’t around when Propellerhead were in talks with Richard, nor do I have any proven facts. I heard (from Ernst, I believe) that they had shown him Reason (probably an alpha or beta back in 1999 or 2000) and he’s supposed to have said that he liked it but was missing an ‘instant wave editor’ so that he could edit samples on the fly. There is an editor now, but back in the 1.0 days you couldn’t sample or edit samples, all that existed was NN19 and Redrum for basic playback of samples. You’d have to ask Ernst for facts and details..

Well, technical details aside, here’s some good stuff which came out of me asking Marc Weidenbaum some questions: 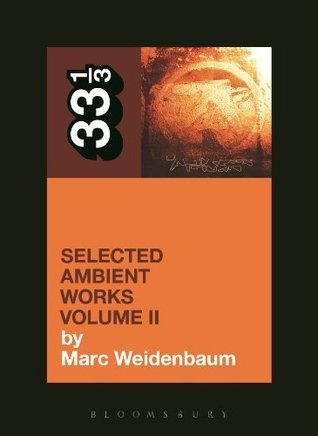 How did you came up with the idea to write a book about this album?

Marc: I have written about music, sound, and art for many years, and long wanted to do something book-length. I was fixated on the idea of the focus required for such an endeavor. I admire the 33 1/3 series, in particular for how diverse have been the books’ varied approaches. The way that 33 1/3 functions is that every few years the publisher has an open call for proposals. I proposed this book in April 2012, having previously submitted, back in 2007, a proposal that wasn’t accepted. The earlier proposal, like this one about Aphex Twin’s album Selected Ambient Works Volume II, was about a record I have often given as a gift. I wanted to write about an album I had personally felt evangelical about in the past. After considering many such records — including ones by Monolake, Oval, Pauline Oliveros, Boxhead Ensemble, DJ Krush, and others — I decided that the Aphex Twin album, besides being a personal favorite of mine, was a record many people love but that very few have written about at length. This suggested a vacuum I could help fill a little.

What makes this album so special for you?

Marc: It’s one of my few all-time favorite albums that I didn’t like much at first. I’d put it up there with Bitches Brew, by Miles Davis, in this regard. I had been a fan of ambient music for a long time before it came out — Brian Eno’s Thursday Afternoon being a high point — and this album really challenged me, at the time of its release, to understand it. I think I admired Aphex Twin’s album Selected Ambient Works Volume II long before I appreciated it, and appreciated it long before I loved it, and loved it long before I understood it.

What did you find difficult about writing this book?

Marc: The hardest part was the beginning and the end. The hardest part of the end was the deadline. I gave myself a very strict one, to make sure I got it done and made no excuses for belaboring the effort. Those last few weeks were quite intense. The beginning was difficult because in order to write the book I wanted to write — the book I proposed, the book I eventually did publish — I found I first had to write the book I didn’t want to write, a much more straightforward, traditional exploration of all the songs on the record. I wrote about 45,000 words of the latter book so I could get it out of my head, and then really focused on the book I wanted to write.

There are these stories of Richard D. James who has put all his recording equipment in his bedroom. Is this where he got into lucid dreaming for creating this music in a different state of mind?

Marc: The role of “lucid dreaming” is quite useful in understanding the album. That state is a liminal one, somewhere between waking and sleeping. By extending it, you avoid moving from one to the next, and you experience a kind of consciousness that is apart from everyday experience, one in which time is beside the point. Not only is it the manner in which Aphex Twin has said he recorded much of the music, this is also the state the music induces in the listener.

In your book you write that even before singing with Warp he got quite a lot of money from advising companies who wanted to use his music in commercials. Didn’t Richard have any artistic problems with these more commercial exposures of his music?

Marc: My sense is that it was quite the contrary. According to several conversations I had, most importantly with his former representative at the music publisher Chrysalis, working with commercial clients freed him up from having to tour or even concern himself with what a mass audience of record buyers desire to listen to. This gave him the financial freedom, the line of thinking goes, to make the kind of music he wanted to. But to be clear: this is still second-hand information.

In general there’s a lot of confusion about lots of things Richard has produced and how he has done these things. Why is some much information about these artistic decisions unknown?

Marc: The one thing I think we can say clearly about Richard D. James is that he doesn’t want these things to be clear. He very early on embraced confusion, a murky self-definition, by using multiple pseudonyms, and plying the media with stories that threw trainspotters off his trail.

When is the last time you’ve spoken to Richard D. James?

Marc: That would be 1996, when I interviewed him in regard to the release of his Richard D. James Album (note Marco: see this link).

It seems he’s not as active as before, do you know the reason why?

Marc: I heard many stories during my research, but none I can present as fact. The closest I can get is that Richard D. James seems, by some counts, to have been happy to find a way to make music and not worry too much about the routine process of record releases and touring.

The music on SAW2 feels very much like generative music. Like those old wind chimes. An effect which Richard also uses on this album. It feels as if randomness is an important factor for this album. What’s your view on this?

Marc: I agree. The wind chime track you mentioned — it often goes by the name “White Blur I” — gets at this when you reflect on the wind chime and its close cousin the aeolian harp as examples of early generative instruments: things that are both system and composition, composition-as-system. Much if not all of Aphex Twin’s album Selected Ambient Works Volume II involved very repetitive sound, and in most of those cases the extent to which these tracks are performances, or compositions, involves subtle changes in timbre over the course of the song. These subtle changes have a quality of chance to them — of slight shifts — that suggests natural forces at work.

Looking back on this album now 20 years later, what do you think is the main musical heritage of this work?

Marc: As with a lot of people who were ahead of their time, his legacy may get confused a little, sublimated, as his once-unusual approaches have become the norm, from his emphasis on very quiet music, to his exploration of super simple melodies, to his balance between the worlds of dance music and art music, to his interest in fierce rhythmic activity. I hope he will continue to be seen as a guiding force in all those areas, and all the more so as an example that someone can be strong in areas that are, to varying degrees, in conflict with each other.

Marc has also made a lot more information about his book available on his website, see disquiet.com/2014/02/09/disquiet-comsaw2for33third/

Where to Get the Book: You could always order it through (or locate it at) your local bookstore, for example those (such as City Lights in San Francisco and Powell’s in Portland) that are graciously hosting me reading from it. The book is available to purchase at amazon.com (paperback and Kindle-digital), the Google Play store (digital), and bloomsbury.com (paperback, epub, PDF).

Melodiefabriek 11 years old!
The Common Linnets did a very brave thing at the Eurovision Song Contest