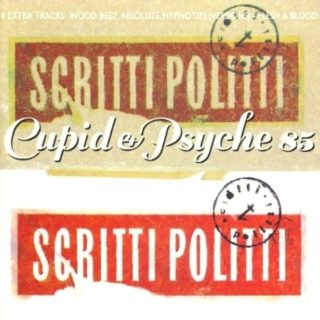 It’s June 10, 1985 and I’m still 16 years old. A sugar sweet album totally changes my whole perception of music: Cupid & Psyche 85 of the band Scritti Politti. It taps the zeitgeist right at the center spot. Me being in the middle of my own puberty.

At the time I didn’t even own a 4-track recorder. Let alone a drum machine and a synthesizer. I lived with my parents, played guitar from my bed and sometimes created a song.

But today it’s the 30th anniversary of Cupid & Psyche 85. An album that was created by singer Green Gartside and songwriter / keyboardist David Gamson who together with drummer Fred Maher put the band name Scritti Politti firmly on the map with it.

In the early 80’s Green and David develop an obsession for modern technology; synthesizers and drum machines in particular. Thanks to these new instruments and machines they come up with a new and modern sound for Cupid & Psyche 85.

Several years later in an interview with David he’s asked about the synths and drum machines they used. He comes up with this list of classics:

“those are the ones I can remember”, he says.

Well, good ol’ memory … It confronts me with my own memories of the past. When the first samplers were introduced. When we slowly moved from analogue to digital sound. Long before the internet. Even before the advent of the mobile phone.

And what about MIDI? The new open protocol that made it possible to connect drum machines and synthesizers with each other. It was no longer necessary to play all instruments yourself by hand. Thanks to MIDI you could combine drum machines and use sequencers to triggers synths.

What is striking is that the hit singles from the album such as Wood Beez and Absolute don’t use any MIDI sequencing. The super tight feel comes from recording with the tape machines at half-speed while playing them back at normal speed, producing a tighter feel. An old trick.

On other songs, MIDI sequencing was used (using the Roland MSQ-700 sequencer for example). Synchronizing the sequencers and drum machines with the tape-machines at that time was done via MIDI Clock:

That meant that if you had a small keyboard part that appeared in the last 10 seconds of the song you needed to start the song from bar 1 and wait 3 minutes and 30 seconds until the part showed up. Invariably you’d have accidentally counted wrong and the part would play a bar too early, or late, and everyone would groan, roll the tape back and try it again.

Another disadvantage of MIDI according to David was the annoying poor timing of MIDI:

However, MIDI did introduce a whole new set of problems. For Those of us That had gotten used to the accurate timing or CV / Gate sequencer switching to the sloppy inconsistent or MIDI timing could be very frustrating.

A few years ago after a Scritti Politti concert in Amsterdam Greens asks me to ask the DJ to play the latest CD of DJ Shadow he hands out to me. Later on I end up with Green, his wife and a couple of fans at a restaurant in Amsterdam. Green tells me about his friendship with Miles Davis and the program Propellerhead Reason which he now uses for his music. I tell Green that I have developed hundreds of presets for Reason’s Factory SoundBank. Which make the link between us just a matter of choosing the right preset.

Through the complex layering of drum patterns, synth basses, guitars and additional synths Scritti Politti shows the world a new kind of style with Cupid & Psyche on 85. Green is not trying to act tough. His voice is silky and sweet as sugar.

Now 30 years later it still is. I have not forgotten about it.