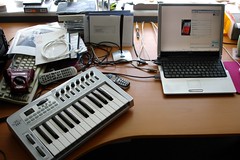 There are still bands around who would like to spend over 2 years in the studio. Why is that? Is that because the record company thinks it should be done perfectly? Is it because you feel insecure?

Sure, if you only release an album once in a while it should be done as good as you can. But the downside is that you start hating your own music and it will cost you a lot of money and life energy.

Many modern albums sound bad anyway, no matter how much time is spend on them. Most of the time a mastering engineer ruins the album at the mastering stage. Check some modern CD’s and you’ll see what I mean. Latest U2 for example: seriously bad sounding. I can’t listen to it. Zero dynamics, everything is SCREAMING!

There you go: power to the blogging musician. A musician who’s not afraid to finish stuff quickly, not afraid to have a lofi sound, but one who’s at least concerned about dynamics. A person who loves remixing and building on the past.

Things are changing fast the last couple of years. Let me tell you this: I am far more interested in the creations of independent artists using Creative Commons licenses than those overproduced albums which are trying to sound louder than someone else’s album. And yes: I stopped buying those. My only exception of the last couple weeks: Scritti’s ‘White Bread, Black Beer’.

Just do it: create music and put it on the Internet. People are waiting to become your fan, your friend and to step into your niche.

But do you need that too for your art? Do you really need to spend 2 years in an expensive studio to make something which people will play in their car, on their computers, their iPods or burn onto CD’s?

Building on the past
Arif Mardin RIP

4 Responses to 2 years and counting