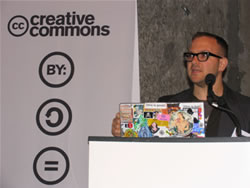 Yesterday, I attended a workshop for p2p television at Felix Meritis, Amsterdam, the Netherlands. The event was organized by Creative Commons Nederlands. It was a great meeting mainly because BoingBoing‘s Cory Doctorow also showed up with his highspeed talk and his sticker-laptop.

The BBC also had a talk about online streaming video and radio. And the Dutch Omroep.nl announced an agreement with the Dutch Tribler p2p-software. This does sound interesting, because Tribler is based on the Bittorrent-format plus adding social-network features on top of that.

However the current media feels like a huge slow movin’ monster. The main issue still is about copyright. Dutch Omroep.nl is interested to use Creative Commons licenses but probably only for archive-work (yet), like the BBC. I told them that YouTube for example will compete and doesn’t care much in general about copyright. So in my opinion all public broadcasters should hop on that bus to. Join the same networks.

I get the impression that there’s The Old Media and The New Media. And between those 2 there’s a gap, a gap which is getting bigger and bigger. I consider myself New Media. I do music and sound design. And I guess I am a blogger since 2000, when I started Raapie.nl. Podcasting, p2p filesharing really is my thing. I totally believe in Creative Commons licensing.

Watch out, or else Cory might call your organisation ‘Not ready for the internet’ 🙂

Easier is better
I swim