SoundCloud has announced On SoundCloud today. Short quote from the email I received from Alex Ljung (founder and CEO of SoundCloud):

Big news to share today: I am proud to announce the launch of On SoundCloud, our new creator partner program. On SoundCloud lays the foundation for creators to make money from their work on the platform.

We’re laying this foundation by initially inviting a small group of creators to become Premier partners in the On SoundCloud program, enabling them to make money on the platform. Over time we will roll this out across the creator community.

To make this possible, we’re introducing advertising from select brand partners to SoundCloud. When someone sees or hears an ad, they’re supporting an artist. We will include ads gradually and bring on more advertisers as we grow On SoundCloud.

Ways to make money through SoundCloud might be cool and welcome, but adding ads to their services was the last thing I was expecting from SoundCloud. SoundCloud for years and years have said that they were proud to be an ad free service. Offering paid plans made this perfectly sensible. I am wondering why they have changed their minds so suddenly.

I am an early adopter of SoundCloud and once paid 250 euro per year for their Pro plan. Later this got changed in a way cheaper service for just 9 euro per month! Like most other online services it’s obvious that they often struggle with finding the right business strategy. Maybe their current plans of free, Pro (3 euro) and Pro Unlimited (9 euro) brings in not enough money.

But who will benefit from the ads, the creators or the companies who are advertising? Or both? In general advertisements want to seduce the customers. Which is bad if you want people to listen to your audio. It’s a huge and sometimes very annoying distraction. And advertisements have lost their power over the years, people block them nowadays, not only with ad blockers in the browser but also in their mind. And in general you need to have lots of views to be able to make a little money on ads. An advertiser will only take you seriously when you bring in a large numbers of views.

When I look at the new plans for on.soundcloud.com I find a new offering (Premier): 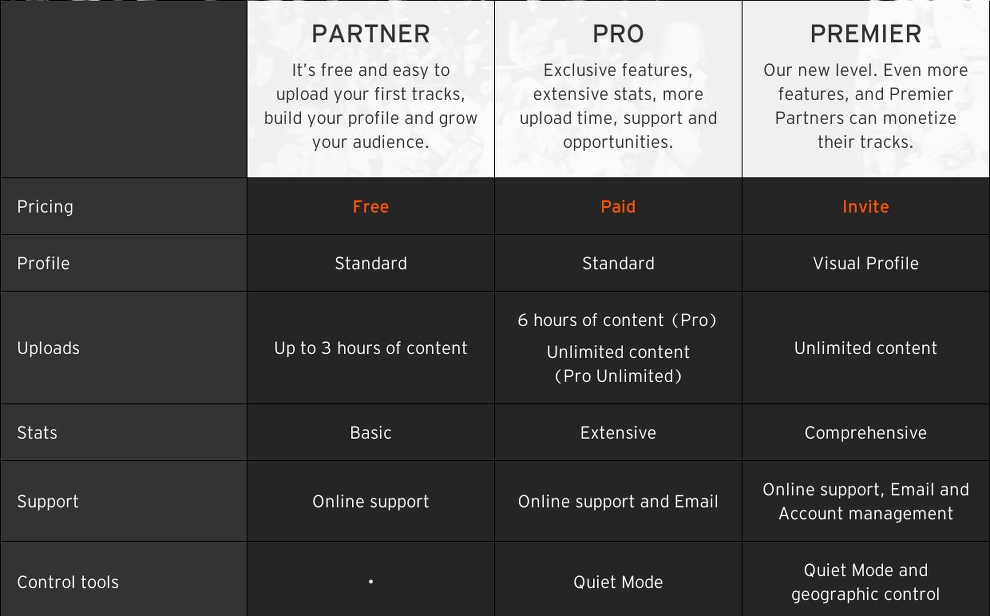 I see that “Premier Partners can monetize their tracks” but it’s unclear to me how exactly they can achieve this. I am certainly not a Premier Partner right now. But like I say, I am just an early adopter.

It might be cool for SoundCloud to work with some large companies. For sure they will be able to offer these companies large amounts of views/listens. But for me as a creator in a niche market I am not so sure about these new developments. I am worried mainly because this was the last thing I was expecting from SoundCloud. I truly believed in their ad free service. But maybe SoundCloud will prove me I was wrong. Let’s hope it will!

And there’s another thing SoundCloud will be introducing in the “coming months”: a subscription service to let listeners opt out of ads. They are copying what other music services are already doing. But it might be a biggie ’cause:

The music world is spinning around, that’s for sure!