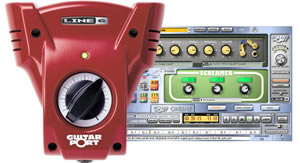 At the end of last year something cool happened; my mates at Propellerhead sended me a Line6 GuitarPort. After I installed it and turned it on I was amazed by the sounds which can be produced by this device.

I am a tube-amp lover. On all songs I recorded in the past, all CD’s I’ve been involved in, all the live gigs etc. they are all 100% tube based. The last couple of years I mainly used a Vox, an AC15, at maximum level. For loud gigs (I don’t like doing these anymore) I might use a 50 Watts amp, like the Dutch handmade Koch KV50 I still have. Great sounds, dynamic, clean and they push trough a dense mix easily.

In the studio I recorded many tracks using one of those tube-amps through a Palmer Speaker Simulator PDI-03, which works like a load box. Simple to use and the sound is dynamic and clean. But well… back to the GuitarPort…

One of the things which is really cool about the GuitarPort is that it has all these modeled antique tube-amps. The Plexi for example, which sounds really cool! This is one of those amps I am probably never able to buy because they are simply too expensive. But thanks to GuitarPort now I can! You don’t need to turn it up loud and fool around with mics. No, you simply select a preset at the GuitarPort or create a few of your own custom sounds and save them.

In this month’s edition of UK magazine Sound On Sound you can read an in-depth article about Line6 which is very interesting. Sound designer Jeff Slingluff has some interesting things to say about Line6’s approach to modeling these cool old amps. Line6 seems to be very accurate in modeling those amps because I have tried some other brands and never really liked them. The only thing I notice with the GuitarPort is a slightly less dynamic tone compared to some real amps, but that’s not a real issue when recording because compression is what you will be adding anyway! The latency is very low. But Line6’s new device TonePort (which is not only meant for guitarplayers but also includes bass and mic amps) even solves latency issues, by having the TonePort handle the processing instead of your computer’s CPU. Very clever!

I also like the fact that these products are reasonable priced, not too expensive. So any guitarplayer can easily get good tones thesedays which was very hard to achieve 5 years ago! This is the real beuyty of modern techniques like Line6 is using, they are building on the past by creating devices which have That Sound while offering a simple an easy interface at the same time. I can fully understand why Propellerhead made a deal with Line6 some time ago. Both companies seem to be driven by the same idea: offering great sounds, with an easy to use interface for a reasonable price.

Hopefully you will be hearing some guitar work from me someday soon. Not only am I planning to record more guitars this year on new songs, I am also working on some sound design project which includes guitars and is meant to be used in…. you guessed it: Propellerhead Reason 🙂

I never liked DRM, but I am not alone
FilterBoxx for Reason

8 Responses to Sound design for guitarplayers