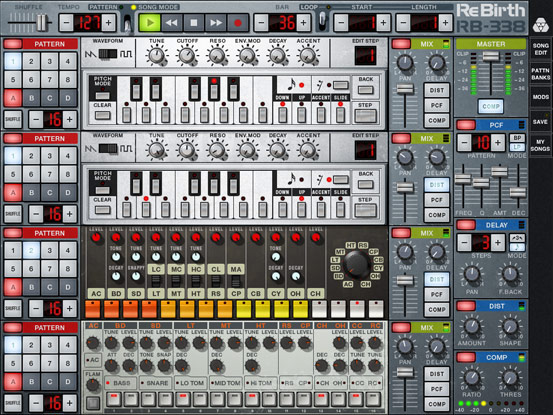 ReBirth for iPad will be discontinued because Roland says the product infringes the company’s intellectual property rights.

According to Propellerhead (see this link):

We have decided to discontinue ReBirth for iPad. The decision comes after a statement from Roland that the product infringes on the company’s intellectual property rights. Rather than refuting this claim, we have decided to honor our long-standing relationship with Roland Corporation and has, therefore, come to the conclusion that the best path forward is to discontinue the product.

This is such strange news because when ReBirth was introduced back in 1996 Roland’s founding father Ikutaro Kakehashi told Propellerhead’s CEO Ernst Nathorst-Böös that the software program was the “next step”. But now a few months after Ikutaro’s death this program suddenly infringes the company’s intellectual property rights? They are 20 years too late!

Roland makes a historical mistake. An evil one!

And you start to wonder what will happen to any of us who is coding 303, 808 or 909 emulators. Or those emulating doing Minimoog, classic Neve or Pultec EQ, emulation or something like that. All product infringements? …

4 Responses to ReBirth for iPad discontinued because of copyright infringement!