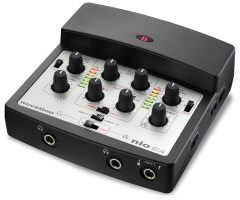 Have you ever heard of the Rockman? I was 14 years old at the time, playing guitar. I didn’t buy it although I had a friend who did. It sounded super noisy, super distorted and compressed. When you would plug in an electric banjo I think it would still give you that famous guitar sound of the band Boston. That’s because the creator of the Rockman was Thomas Scholz who was also the guitar player of that band . Although it was super limited all respect goes to Thomas for invented this new way to record guitar.

I bought a Peavey Pro-Fex (still have it in a 19″ unit) a couple of years later based on a very positive review I read in Dutch magazine MusicMaker. According to the review the overdrive sounded very “tubelike”. Well it did not. What I heard was these strange overtones which became a real problem when playing high notes and bending them. At the time I didn’t know what was causing it. Now I know: some seriously digital aliasing artefacts.

I also bought one of the first Zoom multi effect units with an amp simulator included which totally sucked. It had this over compressed tone which just fucked up the character of the guitar. Didn’t matter what you plugged into it, it all sounded the same.

Only when I bought a Palmer PDI-03 Speaker Simulator my life changed. I used it with Fender, Koch, Vox and Marshall amps, and it sounded great. Okay, it lacks a little air but it’s super dynamic and a superb way to record your amp without blowing your ears. I also used it live and any engineer I’ve met loved it. It uses an analog passive system and it’s still super useful so I haven’t sold that one.

I have tried and used many software simulators. For example the Line6 GuitarPort which I still have and I have tried Native Instruments Guitar Rig on a couple of occasions. But somehow the software that came with the small Novation Nio USB (version 1!) interface I like the most. I am using it for years and years. Novation stopped making those units. Mine is half broken, the 2nd headphone amp only plays the left channel and the pre-amp is lacking power (I need to turn the volume almost all the way up to get an okay input signal when using external microphones). But the included guitar simulator software is great. And since the interface has a DSP-processor on the unit you can record the signal without any latency.

Novation stopped making audio interfaces. But why did they also stop making this kind of software? It’s superb! And in my opinion it would be great if they would create a couple of Rack Extensions for Reason out of these (old) Novation Nio rack devices. They even look a bit like Reason devices too: 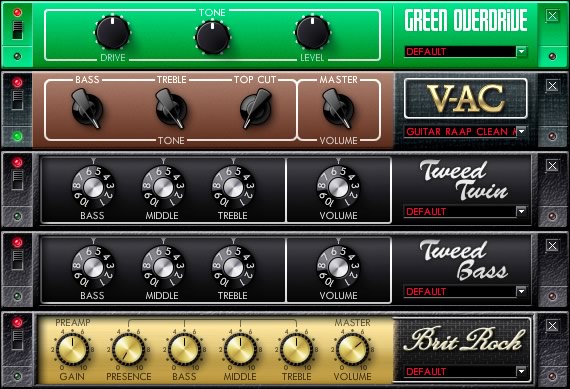 My Fender Voodoo Strat (action way too high, strings way too old, with way too much dust on the body) through the V-AC (Vox AC15/30 simulation) and nothing else, so direct input from the unit, it sounds like this:

Nothing in Reason can produce these tones. The Line6 device, although useful, is using way too much compression for creating it tone. And the new Rack Extension for guitar players like you and me, the Kuassa Amplifikation Vermilion, although sounding nice and flexible (hope to do an in-depth review for this unit soon), is not capable of producing these tones either. So please Novation, consider doing these Rack Extensions for Reason!