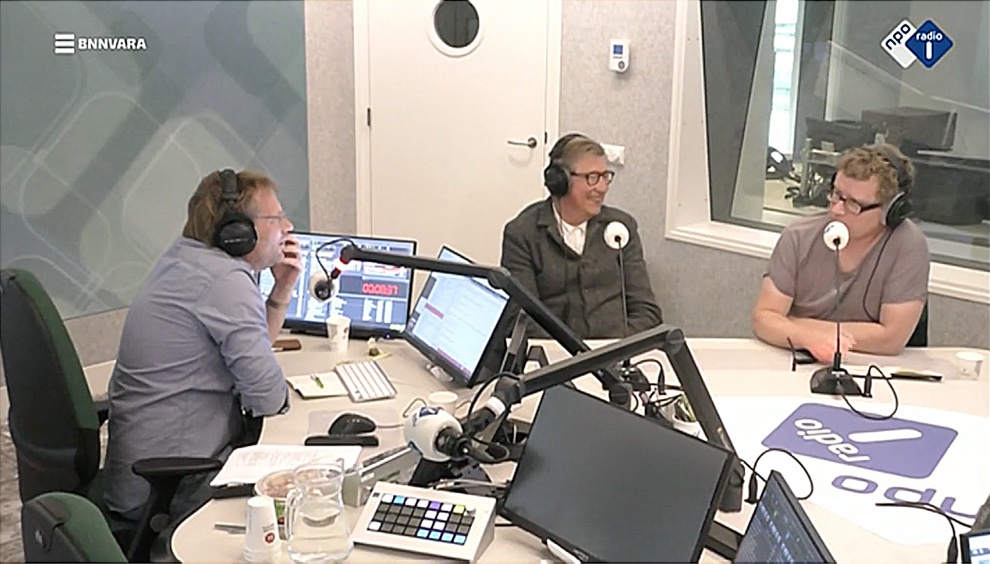 Last week Henk Hofstede (NITS) and I were being interviewed for Dutch public Radio 1 (program: De Nieuws BV for BNN/VARA). We talked about the album we created with 30 musicians world wide called The Record Man (see also this blogpost at Melodiefabriek). It’s an interesting but also a bit of a tragic story…

The interview in Dutch can be found HERE (audio + video).

Transcription of the whole interview in English

[Human Heart being played]
Patrick Lodiers: The single Human Heart of the album The Record Man with singer Hans Croon of The Dutch, Marco Raaphorst on guitar and Rick Snyder of Captain Beefheart on bass. It is a special combination, but there is much more special about this album, for example that it is dedicated to an American fan of unknown bands and especially Dutch artists. With me are 2 people who participated on this album: guitarist Marco Raaphorst and singer/guitarist Henk Hofstede of the NITS. Welcome to you both.

Marco, this fan, this special man, is the Ron Kane who died last year. What kind of person was he?

Marco Raaphorst: Fan of many bands, including my old band MAM, but also fan of the NITS, The Dutch, Fay Lovsky and many other bands. He was more interested in the non-mainstream bands. So more of the obscure or the more artistic thing he was looking for. But strikingly many Dutch contacts actually.

Patrick Lodiers: But he lived in Los Angeles and then he comes into contact with that Dutch music. But Henk, how did you get to know him then?

Henk Hofstede: I don’t know exactly. I visited him in 1985 when I travelled through America. That was the first time I had seen him in his house in Rose Avenue among all his records.

Patrick Lodiers: Among all his records, but I’ve heard that there were 30,000!

Henk: Yes, I didn’t count them then, but it looked like a lot. And Ron could have been a member of The Beach Boys, such an American band, a bit obese but super American in terms of speech and expression, but an incredible lover and connoisseur of music. But indeed a lot of Dutch music. It all started with Super Sister, NITS, MAM, Fay, Gruppo Sportivo, you came across your past all over again.

Patrick Lodiers: So he was a man who loved music, but what was his work, was he part of the music industry?

Marco Raaphorst: Partly, he imported a lot of albums and also distributed albums, but a lot of things went for free, a lot of people he sent cassettes to for example. He was actually more friendly with a lot of people to turn them into liking the music he liked. And that was always something that wasn’t very mainstream. Music you might not have heard before. That’s how I actually know Ron. I met him a couple of times in the nineties when we had to perform in the Netherlands and he happened to be here. And then he went to a gig with us and he was talking about all kinds of things that I perhaps did not know or perhaps knew like Frank Zappa, that he was a great lover of. A special figure in that respect.

Patrick Lodiers: But how did you get to know him?

Henk Hofstede: I looked him up, I knew of his existence. In the early 80’s a friend of his, Warren Bowman, who also plays on this album, stood in one of Old Beijerland’s barns when I played with the NITS and who said: “I am a big NITS fan, I’m from Los Angeles”. He introduced me later when I went to travel through America and came to Los Angeles. And then we went to Ron and Ron guided me around a bit. He drove us through the hills of Laurel Canyon in the car of Warren, who had a white Pontiac, an open sled, and then pointed out: “here, this is Frank Zappa’s house, he lives there.” That was my first experience in America. 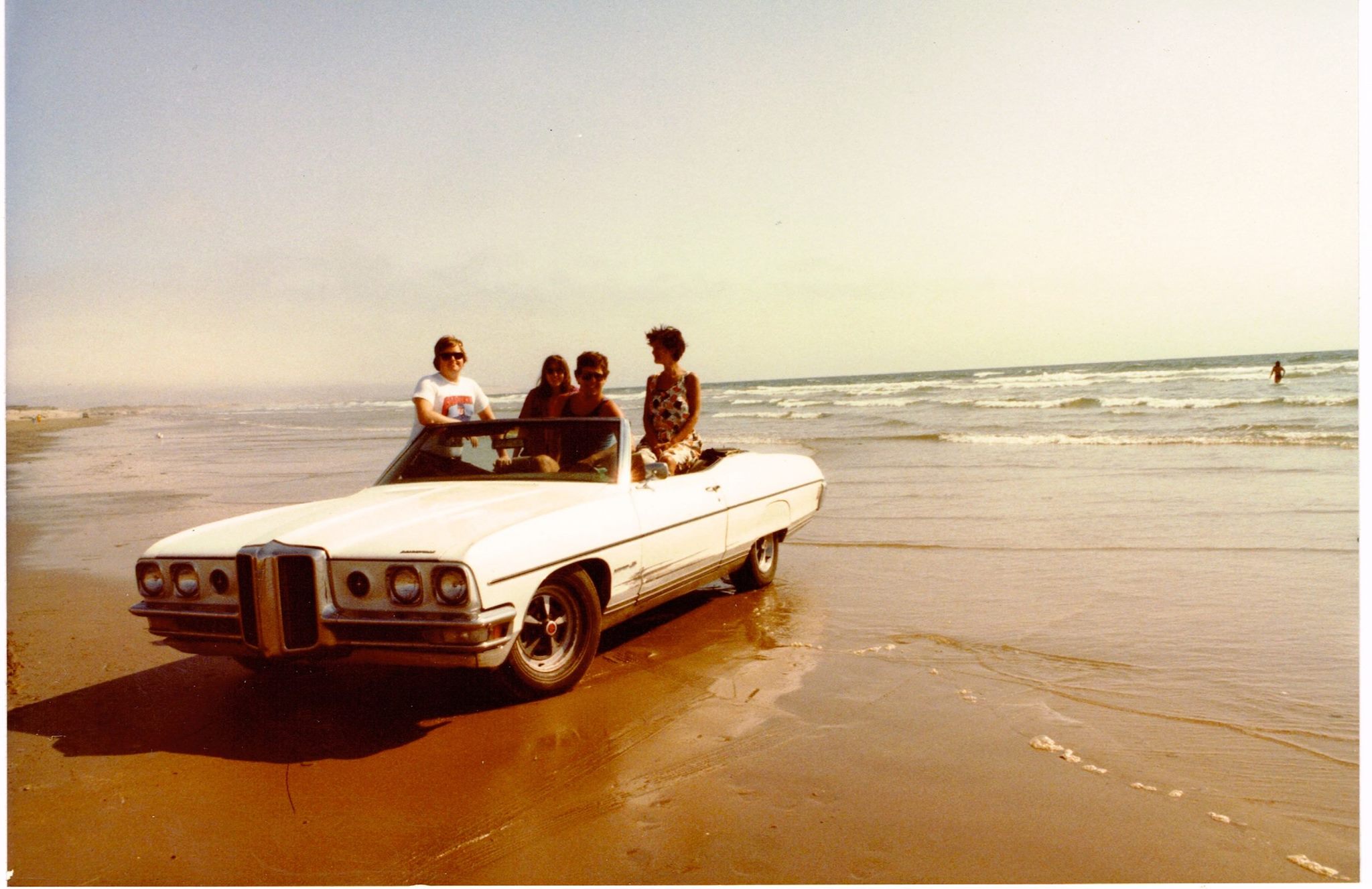 Patrick Lodiers: So that Ron Kane was actually a big fan but also someone you thought about: “we can learn a lot of pop history from him?”

Henk: You don’t know that at all at such moment. But it is someone in the middle of it and actually a bit of a guide in the American landscape.

Patrick Lodiers: Tomorrow the album The Record Man will be in the shops. It is a tribute to this Ron Kane with 30 international artists. You Henk play on it, Marco you play on it as well. How did this album come about?

Marco Raaphorst: It was an initiative of Bob Gaulke from New York, a songwriter and producer. He came up with the idea when things went badly for Ron last year, he had heart problems: let’s do something for him musically. Maybe a song, maybe a few songs and so Bob contacted us via Facebook and via mail. But there was such a huge response to that, so many people told Bob ”yes, I’m pleased to do this!” so that became a bigger project. It wasn’t just a song, it ended up becomming a record. But during the making of it Ron suddenly died and then this project actually switched from a get-well-better-sone-project to a tribute to Ron.

Marco Raaphorst: No, that is actually a tragic thing. We made it for Ron to cheer him up and we didn’t succeed.

Patrick Lodiers: But did you write the songs yourself, or did you get the music sent to you in the form of: “do you want to play this or play along with it?

Marco Raaphorst: It varied a bit. Many songs have been written by Bob, but a lot of ideas have also been put forward by other musicians. So it’s a bit of a mixture and I think that’s what makes this album so interesting, because there are a lot of different styles and sounds to be heard on it, a variety of sounds.

Patrick Lodiers: We’ve already played a song, but another song is White Car, Blue Ocean, which I think is about that white Pontiac?

Patrick Lodiers: First, let’s listen to it a little bit.

[piece of White Car, Blue Ocean is being played]

Patrick Lodiers: Is the spirit of Ron Kane on this album Henk?

Henk: Well the spirit… at least he’s in that car! I took pictures and it was a ride for me that was so in line with what I was looking for in America. The film The Birds by Hitchcock contains a beautiful scene that he drives with the birds, with those love birds, along the ocean. I felt like the love birds who sway back and forth. And we did indeed listen to Johan Strauss, the Blaue Donau, why don’t I know.

Patrick Lodiers: So this song is a real tribute, but Marco you have used his voice in the song Pasadena. We can’t play it all the way, we had to edit it a little bit, but it sounds like this….

[piece of Pasadena, by MAM is being played].

Patrick Lodiers: But this is his voice, how did this song come about?

Marco Raaphorst: Ron often went with us (MAM) to our gigs in those days when he was in the Netherlands. And one day he told this story in the bus on our way to the gig. He then stayed at the Quentin Hotel in Amsterdam and we picked him up on the way to, for example, Tuitjenhorn where we played. One day, Ron told this whole story. The funny thing is that the Rick he mentions is Rick Snyder who also participates on the record on the single, and that is the old bass player of Captain Beefheart. It’s him with the CD single of MAM in his hands. And that single is called Oote, a Hanlo poem that is… you can hardly make it any more Dutch! And that people in LA liked this Dutch music, that’s of course a bizarre story! So I told Tom America, the person who composed this song, we should actually dosomething with this story. That text “5000 miles from Tilburg”, that’s just a brilliant story. And that is why we made that into a track of ours.

Patrick Lodiers: Well, it has become a beautiful record! Tomorrow it will be in the shops. How should we remember Ron through this record or through much more?

Henk Hofstede: I always think of Ron, he has often stayed with me in Amsterdam and then he asked me: “do I need a strippenkaart?” When he entered the city. So I always have to think about “strippenkaart” when I see or hear Ron.

Patrick Lodiers: This CD is much more than a “strippenkaart”, it really is a selection of international artists, you have played on it as a tribute to the greatest fan of all time, but also the greatest music lover. Tomorrow the album The Record Man will be in the store. Thank you Marco Raaphorst and Henk Hofstede.

Henk Hofstede and Marco Raaphorst, all together now: our pleasure!