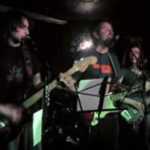 I love Scritti Politti. I am a fan. A fan for many years. My DiSfish partner Cezary Ostrowski is a huge fan too.

Green Gartside, the singer and songwriter of Scritti, stopped playing live since 1980! Panic attacks, serious panic attacks he got when performing.

And guess what? Yesterday evening Green did a gig at a pub under the name Double G & The Traitorous 3 (Double G: Green Gartside). After 25 years, Green enters the stage again!

I was not able to go to the gig myself, but hopefully I will be able to do it next time Green is performing! 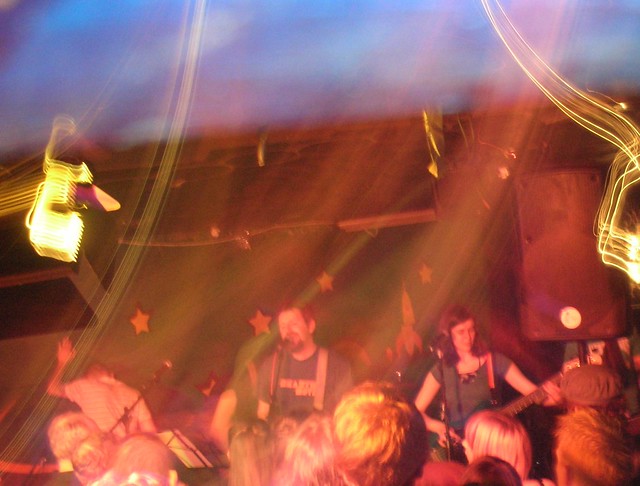 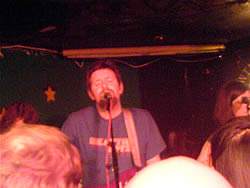 Update 2: Richard Wallis of the Yahoo Scritti Maillist send me one of his camera phone photos and agreed on me posting his review (it’s great Richard, it’s a classic!) of the gig. So here we go:

The most enjoyable gig ever?

If that sounds a bit over-the-top I should explain that I generally find attending live concerts as uncomfortable as Green does performing at them. Anyone unfortunate enough to meet me last night may have picked up on that!

However, I’m so happy that I went along last night. It was fantastic.

Apologies if I ramble on a bit here. I just want to share something of the experience with those of you unable to go.

I went along with a couple of friends (interested in Scritti but highly sceptical before the gig), having somehow negotiated the walk up Brixton Hill without purchasing any class A drugs. To say The Windmill is an intimate venue would be an understatement. There’s not a lot of room at the front and behind that there’s a big pillar obscuring the view of the stage. Fortunately we managed to make our way to the front.

As the first band played (a three-piece guitar band with an annoying fondness for stop-starting through their songs) I remember wondering how on earth Green was going to fit in. Someone mentioned that he’d been spotted at the bar looking like a frightened rabbit. At about 9.50 Green’s band took to the stage, exchanging nervous glances whilst a series of reggae tunes pounded from the soundsystem. Then I glanced to my left and saw the tall figure of goateed Green wearing a Beastie Boys T-shirt apparently psyching himself up. I think everyone in the audience (or at least those who realised who this was and his history of stagefright – by no means did everyone at the gig know who Green was) was anxious and felt for him.

Green lumbered onto stage with a pint (of water?) in his hand. He almost knocked over the lecturn holding his lyrics and it did cross my mind that he might be quite sozzled. However, as soon as he introduced the band it was clear that he was relatively sober, if demonstrably nervous. He explained that two of the band had only joined in the last week and apologised for the lack of rehearsal and that he needed to use a lyric sheet.

Then, an almost unbearable sense of excitement and tension before Green launched into ‘Boom Boom Bap’ to backing tapes with his vocals sounding better than ever and his eyes squinting with effort and emotion. I had a sudden flashback to the hideous ‘Boom There She Was’ performance video and just thought how surreal this was that this guy who even looked awkward lipsynching was up there performing so wonderfully with the audience spellbound. He got a rapturous reception at the close of the song. Then he did 4 (or was it 5) melodious guitar-driven songs, ably supported by his young band.

One of the songs was called ‘Robin Hood’, another was ‘After Six’. There were a couple of acappella moments on one of the songs. I don’t know how to describe the songs – I thought they sounded great but it’s so hard to be objective. The main things that stood out for me were that his vocals sounded better than ever, his confidence grew visibly throughout the evening and he still knows how to play guitar!

All too soon it was over, but he went off stage to massive cheers from the crowd and surely a real boost to his confidence. I think it was inspired of him to start off with such a low-key gig, although he must have realised that there were quite a number of Scritti fans out there.

I felt a bit sorry for the last band, as people started to drift away from the stage area. Green seemed in great spirits and spent the rest of the evening milling around chatting to everyone (well, everyone but me – I really wanted to talk with him but thought it would be a mistake as it was too noisy to hold a conversation and I was too drunk and meeting your heroes is probably not a good idea).

A couple of guys in the gents were talking about the acts raving about how great the second band was, and, although they were probably in their 30s or 40s, clearly had no idea who Green was.

Leaving the pub, Green moved to let me through and I just had to tell him how great he’d been. He said ‘Thankyou so much for coming’ and clasped my hand. Not much of an anecdote but the man is charm personified!

I sort of wish I’d taken more pics – I was conscious of standing very close to Green and being aware of his nerves, not wanting to make things worse by snapping away through the songs. Even so, I have a few pics and a 60-second movie clip to share. Unfortunately, although some of the pics look decent enough on my mobile phone, I tried sending them to my email and they look terrible. I will try and sort that out. 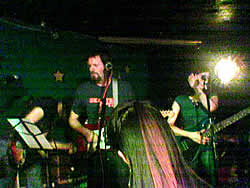 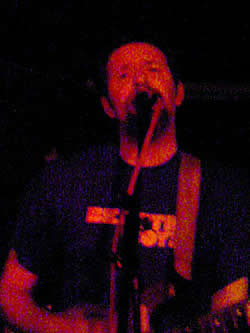 Just like to add a few observations:
The Windmill is indeed a great venue, maybe not the best layout in the world, and looked a bit like a run down youthclub, but the atmosphere was electric, and the DJ was spot on, great mix of, reggae heavy, tunes.

I was very glad I’d bought a ticket on line, as when I got there at 8 it was already sold out, would have been very pissed off to have been turned away at the door.

I really enjoyed the first band, I thought their name, I had an Inkling, was rubbish, but they were well described at the time, by previous poster Steve, as The Magic Band meets The Fall, I’ll happily go see them again.

Green’s band, all of whom seemed to be in their 20’s, comprised of guitar, drums, 2 x keyboards (I think) plus a female five(?) string bass player. Luckily for me the keyboards were almost inaudible, and it was truly, truly fabulous to hear Greens voice (still a thing of beauty) battling it out with twin guitars, and not awash in a sea of synths. They were obviously under-rehearsed, but Green played up the humorous side of the sound having a few rough edges, and seemed fairly comfortable being back in the spotlight.

For songs to make an impression on first hearing they have to be good, and I’d say these songs are good, complex yet simple and well crafted with sweet, sweet tunes. Geoff Travis said he thinks the new album is the best thing Green’s ever done. He also said that Green is ‘the real deal’, which, in this new post-post-punk age is maybe what’s needed to get the Kaiser Franz Monkeys in perspective. I suspect 2006 could be Green’s year.

The replacement headliners The Shortwave Set (and I can’t help thinking that The Bitter Springs pulled out when they realised the lack of attention any band would acheive following Green’s comeback) also put on a good show of sample heavy, sixties-ish pop, and worth seeing if you get the chance.

I hope that posting the news of this gig on this list last week, managed to pepper the audience with folk who were able to provide a warm welcome back to the world of live music for G.G. Hopefully the first of many.

Update 6: And the Guardian writes about the gig.

We’ll soon post a link to tickets and if you don’t get one and your friends do, you’ll be ‘Green’ with envy.