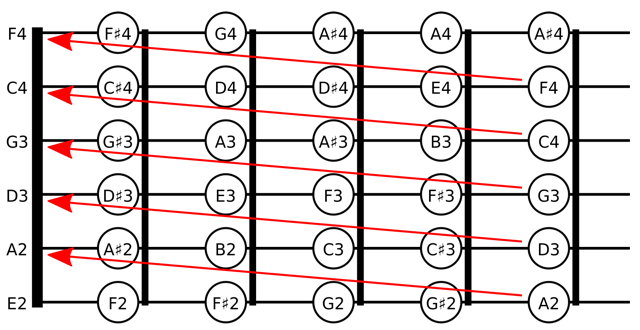 It’s strange how the human brain works. Sometimes suddenly something starts to make sense even if you have heard about it for years and years. This happened to me this week.

I started playing guitar since I was 12 years old. In regular tuning because it was… well, I don’t know… we are all tuning to that system, right? Other tunings felt strange to me. But this week when a fellow Dutch guitar player mentioned his switch to the All fourths tuning this week on Facebook it dawned on me: this is obviously a super cool method to look at the fretboard of a guitar! It’s way more structured than regular tuning. Like playing bass guitar + 2 extra strings. And man, I LOVE playing bass.

I decided to apply the All fourths tuning to the guitar that I keep in my living room. And instead of tuning the 5th B-string to a C and the 6th E-string to an F I decided to use the E♭ tuning. So my guitar is now tuned like this:

The All fourths tuning is a very musical tuning. It’s the inverse of tuning in fifths. Regular tuning works great for open chords and this is probably the reason why it became so populair. But it has that mind fuck moment as soon as you start to solo and try to train your brain to adjust to string-skipping from G-string to B-string.

It will take a lot of time to adopt to this new tuning I guess, simply because I have grew accustomed to regular tuning. I need to find new fingerings for chords and single notes and that will take time. But it feels as if I have just openend a door to a totally new world. A world with a very clear and logical map. Really cool!

10 Responses to All fourths tuning for guitar