Donald Fagen thought that one day he would be an English teacher. Or a journalist. But a mixture of a psychedelic sugar cube and a bunch of bad musicians made him change his mind. The bad musicians played in a band and seemed to be having lots of fun. Donald liked that. During his college years at Bard College in the good old years, the 60s, he met his music partner Walter Becker. What follows is a genius collaboration under de moniker of Steely Dan.

In the 80s Donald music and mental mind comes to a stand still. Just after he released his mind blowing solo record The Nightly. One of the first CD’s ever recorded 100% digitaly. A horror story because of the Sony digital tape-recorder being broken most of the time. A story which has not been included in Donald’s memoirs Eminent Hipsters which has been released recently.

Donald leaves the music world for what it in the 80s. He is asked to write about film music for Premiere magazine which encourages Donald The Writer. What that has yielded, 30 years of mighty fine writing, is now bundled in this first book. With the addition of several brand new stories. Personal stories on his heroes and Donald seizes the opportunity to tell his own story of a band on tour. This is not Steely Dan but the band Dukes of September Rhythm Revue a band which includes him, Michael McDonald and Boz Scaggs. 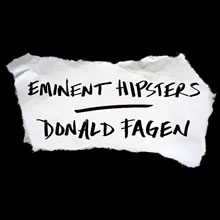 Donald is a great writer. He uses that special blend of black humor and ironic metaphors which we also know of Steely Dan. He presents himself as being half dead already, just like his audience. The rule that you should never attack your audience is not given to Donald. He hates the right wing audience. He hates rich people. And he hates the TV Babies, the generation which grew up after the 60’s with the TV as babysitter. Recently Donald has started to hate people who are starring at their palm all day long.

By a coincidence of fate I turned into a huge Steely Dan fan many years ago. Probably the biggest one in the Netherlands. Maybe also in Europe. I’m 20 years younger than Donald, he’s from ‘48, I’m from ‘68. Indeed I do remember the TV, the altar of the living room. But mostly I do remember that first time hearing Aja of Steely Dan on my dad his turntable playing over some fantastic Dutch designer KEF loudspeakers. And although I already knew how to solo over an E7#9 chord, what I heard here was a brand new universe.

Eminent Hipsters is a small book containing a little less than 180 page-turners. It didn’t fulfil my literary hunger. I just hope that Donald thinks so too.