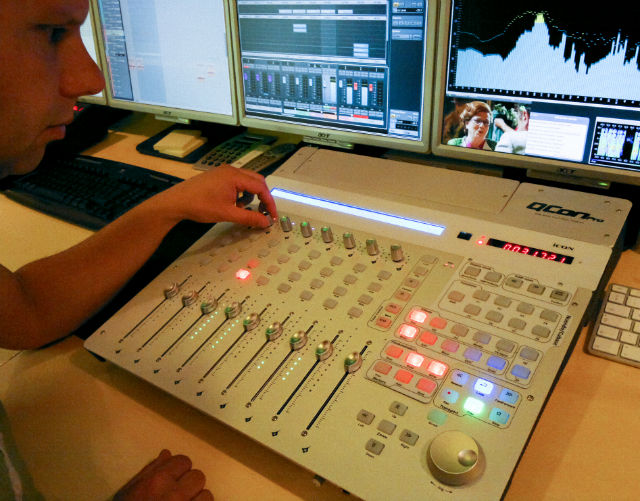 Yesterday I was at my friend’s Gooi & Vecht Studio. It’s located in the basement of the legendary Wisseloord Studios. My friend, Conno van Wijk, is running Nuendo for many years. He has worked with Neve Digital previously. And he also used to work in the analog domain. So he has a lot of experience doing audio post production.

I had brought my old MacBook Pro which we connected via an optical cable to his Lynx audio interface. So my stuff using Reason was directly send into his Nuendo setup as inputs. We did a few brief tests just for fun. The thing I’ve forgotten about was let him make a couple of exports from Nuendo during these tests. So sorry, I have no sound examples of the stuff I’m discussing.

We compared his Waves CLA-2A plugin in Nuendo with the Cakewalk RE-2A in Reason. Both are modelled after the Teletronix LA-2A hardware compressor/limiter. Using both plugins we noticed a couple of things:

During the time I spend there we also demoed the Qcon Pro we borrowed from producer/engineer John Sonneveld who also has a studio in the basement of Wisseloord. This controller is based on the Mackie protocol but unfortunately doesn’t seem to support Reason. The only way to make it control Reason would be by using the MIDI learn functionality, but that takes a lot of time to set up. It’s a lot cheaper than Mackie Control Universal Pro but feels a bit less sturdy (the faders and the jug wheel has some wobble). It would be great if the Qcon Pro would support the Propellerhead ReMote protocol.

Update: someone mentioned on the PUF (Propellerhead User Forum) that the Qcon Pro should be put in HUI Mode when using Reason. Quote: “If you put the thing in to HUI mode it should take right off!”