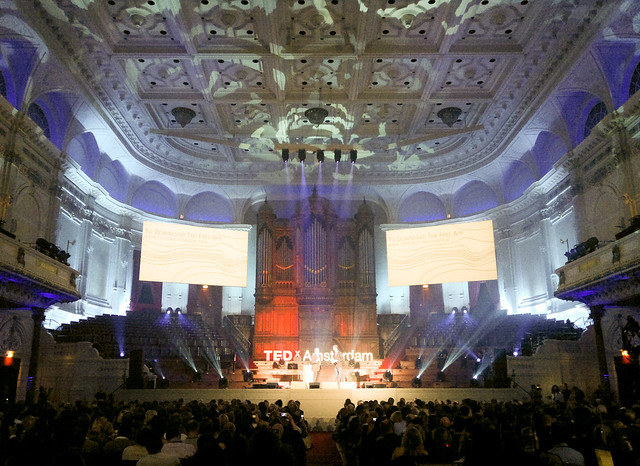 In May 2013 I received an email from Monique van Dusseldorp who’s the Program Director of TEDxAmsterdam.

I’m working on the program TEDxAmsterdam, this year on November 6 at the Concertgebouw.
I think we should do some special things with sound there … would you want to brainstorm with me?

We met a few days later. I came up with the idea of doing a radio drama live. A piano starts playing and then a nice voice starts to unfold a great story… Let’s start from here:

Monique asked me to compose 5 compositions for 5 poems. I would perform them on acoustic guitar live on stage at the Concertgebouw with the help of an extra cello-player and accordionist. Hell yeah! One month before showtime it was decided that the program was already fully booked… fuck me!

Yesterday TEDxAmsterdam 2013 took place. Instead of being on that stage I sat there in that incredible Concertgebouw. The vibes were cool. Some talks were great. Like this one:

Not all, some talks were lame. What struck me the most was that some of the music sucked too. Some people who call themselves a composer are not able to write okidoki melodies. Fuck that, I can!

I thought a lot about that thing we call Attention. Why I wanted to be on that big stage. Looking for the spotlights. The clapping hands, the pads on the back. Why do I need that kind of confirmation, that kind of approval of quality? Insecurity.

On the train ride back home from Amsterdam to The Hague I read Donald Fagen’s book Eminent Hipsters. Donald is a great writer. And an old guy. He’s trying to avoid to be recognized as that famous hipster of the band Steely Dan. Stories about him being bored being on the road. The lame hotels. The bingo aged audience. The fuckers of the TV generation (me included although I hate 99,999% of the stuff on TV, trust me Donald) who come out to see his shows. The right wing idiots who are his fans. The rich people he hates.

The kind of attention we artists are looking for. I think they should ask Donald for a TED talk.

“Lennon and McCartney take two buses to some guy’s house who is rumoured to know a B7 chord”
Donald Fagen went autobio: Eminent Hipsters

2 Responses to My 5 unknown tracks for TEDxAmsterdam