Is aliasing really a problem?

Sound quality is relative. What we consider as bad sound always will often be considered as a nice characterful sound a couple of years later. Back in the day we hated tape noise, flutter, hum, oscillators drifting out of tune, distortion, etc. But not any longer. Nowadays we’re even buying Boutique plugins which will degrade the audio signal just like in the old days. Some plugins even will generate low bitrate quantisation noise and aliasing artefacts.

So some people love aliasing. And maybe even in guitar amp simulation. Not me but I understand it is an effect, it does something too a signal which can be considered as “character”. The aliasing overtones are causing a weird kind of distortion, creating lower sounding overtones which are not EVEN and ODD harmonics but which are a kind of intermodulation. Sometimes the “ringing” sounds as if a LFO is sweeping through sample rates settings. Spooky stuff. Added color and character? Maybe.

Use your ears. Do you like it? If so, happy you. Live is much easier that way. No errors for you then.

But if you are an audio nerd like me, keep on reading! 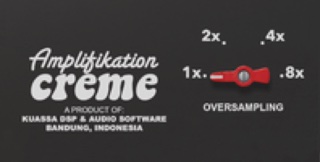 Oversampling is a very effective technique to avoid aliasing. Kuassa has added this trick to their Vermilion and Creme rack extensions for Reason. A parameter on the back of the device clearly shows what it is does: 1x (no oversampling), 2x, 4x or 8x oversampling. I found out that the obvious aliasing artefacts can often be minimised by 2x oversampling. But if you really want to get rid of all side effects, 8x oversampling is the safest choice (psycho nerd alert!).

8x oversampling does put some additional pressure on your CPU so you might choose wisely. You might consider using it only when rendering exports.

I won’t go into all the technical details between both methods, please read this excellent article if you’re interested in learning the difference between both techniques. But maybe you shouldn’t… psycho nerd warning!

Aliasing only happens when a signal above half the sample rate is being generated. So aliasing will occur when for example you start overdriving a tone at 12 kHz. The second harmonic of 11 kHz is 24 kHz and will cause aliasing because it doesn’t fit the 44.1 kHz sampling rate.

To make a long story short: stop overdriving high frequencies and you’re safe. For guitar sounds you don’t need much high end ’cause it sounds too thin. So applying a low pass filter is not a bad idea at all. Easy as pie an no psycho nerd method, just very particle shit, right?

Of course you can use oversampling AND upsampling. Set everything to its maximum value, 8x oversampling and choose he highest sampling rate when rendering exports. This is the psycho nerd audio mode. Be warned. Keith Richards would never choose this one. He doesn’t care for this shit.

This might be my last blogpost about techie stuff… wanna play my fucking guitar!